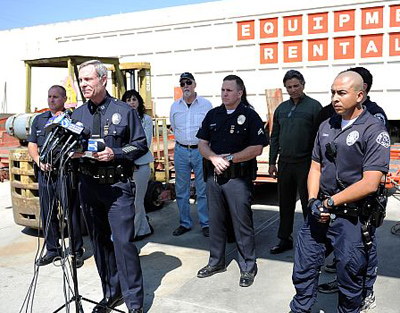 Vowing to permanently wipe out prostitution along Lankershim Boulevard in Sun Valley, community leaders and police announced Wednesday new crime-fighting tactics for the commercial corridor that has been a magnet for sex workers.

Community groups will lead once-a-month night walks down the boulevard, part of an effort to take back their streets. Overhead lights are planned near Neenach Street to brighten the dark areas of the boulevard. And the Los Angeles Police Department is planning more 24-hour undercover stings to target the johns who cruise through the area.

"This is an all-out effort to stop this," said Capt. Joseph Hiltner, speaking at the site of Sun Valley Rentals, one of many local businesses affected by the streetwalkers. "Not only the prostitution but the victimization of prostitutes."

Despite police efforts, including undercover stings and bicycle units patrolling the boulevard, the area remains one of the most heavily-trafficked neighborhoods for prostitution in San Fernando Valley.

"The problem hasn't abated to our satisfaction and not to the satisfaction of the community," Hiltner said Wednesday, adding that the LAPD is concerned about the public safety of the prostitutes, some of whom have reported being raped.

Last week, the department ran a sting in which female officers posed as prostitutes, resulting in the arrest of 34 alleged johns.

Local leaders expressed cautious optimism about the joint effort to drive away the prostitutes and pimps, saying they believed fewer women were working the boulevard since the recent sting.

"The problem has been around forever," said O'Gara, who worries the Lankershim Boulevard prostitutes will simply move down the street to another area.

Nevertheless, community involvement is essential, said Ayalet Feiman, a deputy city attorney and a neighborhood prosecutor who handles many of the prostitution arrest cases.

"In areas where communities mobilize, where people are more vocal and more involved," she said, "there's less prostitution."