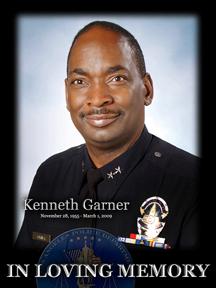 Kenneth Garner, a deputy chief of the Los Angeles Police Department who earned praise for his work toward better understanding between the department and community, passed away at his home March 1. He was 53.

Garner served in the LAPD for more than 30 years, rising from patrol officer in the 77th, Southwest and Central divisions to lieutenant in the Wilshire division. Following a promotion to captain in 1998, Garner held a series of top posts in the Foothill division. In 2005, he was appointed to oversee LAPD's personnel matters, including the hiring of officers. Garner was then named deputy chief in 2007 and last year was assigned to oversee all operations in LAPD's South Bureau.

The South Bureau appointment marked a homecoming for Garner, who was born in Hot Springs, Ark., but grew up in South L.A. Skipp Townsend, an executive board member of gang intervention community group Southern California Cease Fire Committee, said he came to know Garner four years ago. He praised Garner's approach to foster understanding between the police and the community by simply being involved.

"He was a great listener and wasn't judgmental," Townsend said. "He wouldn't just take one side. He was a community person and was sensitive to the community members - not just law enforcement. A lot of the field officers and patrol officers would just want to arrest people. He actually had them stop."

In a statement, Gov. Arnold Schwarzenegger also mourned the LAPD veteran. "Deputy Chief Kenny Garner was a committed public servant who dedicated his career to protecting the city of Los Angeles," Schwarzenegger said. "He worked to ensure the safety of his community and L.A. is a better place because of his service. Maria and I join all Californians in sending our deepest condolences to Kenny's family, friends and fellow officers as they mourn this significant loss."

Townsend recalled Garner's Feb. 20 speech at a fundraiser when the deputy chief "spoke to everyone about his love for the community" and about living near Normandie Avenue and 78th Street. In his talk, Garner described his efforts to improve the relationship between the department and the community. One of those involved a program helping ex-convicts re-enter society that LAPD Chief William Bratton views as Garner's legacy.

In an e-mail, LAPD Assistant Chief Earl Paysinger said: "It was my pleasure to have known and worked closely with Deputy Chief Garner for over 30 years. What made him so very different from others in the police profession was that he not only lived and worked in the community, but he also loved the community. His vision about making it a better place was not something he merely did or said. It was who he was - the very essence of his DNA. The evidence of his caring is powerful and exists in the avalanche of affection by the legions whose lives he has touched during his life."

What's interesting is that legions of people - young and old and from all walks in life - called him their friend, Paysinger added. "And he was truly a friend to them all," he said.

The deputy chief was a guest several times at the weekly Cease Fire meetings. The group meets at Bethel AME Church, the same place its members are organizing a memorial for Garner. The event will be on March 11 at 6 p.m.