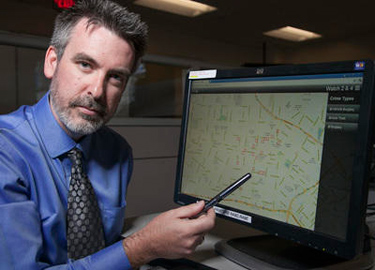 In this photo taken Friday, June 29, 2012, Jeff Brantingham, anthropology professor at the University of California Los Angeles, displays a computer generated "predictive policing," zones at the Los Angeles Police Department Unified Command Post (UCP) in Los Angeles. Police officials say they are having success with a computer algorithm model that helps determine where to send officers to prevent or possibily interrupt a crime, which may serve as a model for other cash-strapped law enforcement agencies. (AP Photo/Damian Dovarganes)

Los Angeles police are aiming to beat suspects to the scene of a crime by using computers to predict where trouble might occur.

The Los Angeles Police Department is the largest agency to embrace an experiment known as "predictive policing," which crunches data to determine where to send officers to thwart would-be thieves and burglars. Time Magazine called it one of the best inventions of 2011.

Early successes could serve as a model for other cash-strapped law enforcement agencies, but some legal observers are concerned it could lead to unlawful stops and searches that violate Fourth Amendment protections.

In the San Fernando Valley, where the program was launched late last year, officers are seeing double-digit drops in burglaries and other property crimes. The program has turned enough in-house skeptics into believers that there are plans to roll it out citywide by next summer.

"We have prevented hundreds and hundreds of people coming home and seeing their homes robbed," said police Capt. Sean Malinowski.

Crime mapping has long been a tool used to determine where the bad guys lurk. The idea has evolved from colored pins placed on a map to identifying "hot spots" via a computer database based on past crimes and possible patterns.

Over the past decade, many large police departments, including Los Angeles and New York City, have used CompStat, a system that tracks crime figures and enables police to send extra officers to trouble spots.

The new program used by LAPD and police in the Northern California city of Santa Cruz is more timely and precise, proponents said. Built on the same model for predicting aftershocks following an earthquake, the software promises to show officers what might be coming based on simple, constantly calibrated data -- location, time and type of crime.

The software generates prediction boxes -- as small as 500 square feet -- on a patrol map. When officers have spare time, they are told to "go in the box."

The goal is not to boost the number of arrests, a common police benchmark to reflect crime reduction. Officers want to either intercept a crime in progress or deter would-be criminals.

"I want to disrupt an activity before an arrest is made," Malinowski said. "You can't arrest your way out of some of these problems."

Jeff Brantingham, an anthropology professor at the University of California, Los Angeles, said the data also is derived from criminal behaviors -- repeat victimization and the notion that criminals tend not to stray too far from areas they know best. 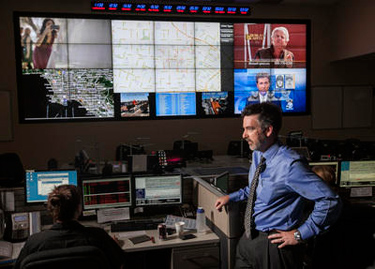 In this photo taken Friday, June 29, 2012, Jeff Brantingham, anthropology professor at the University of California Los Angeles, displays a computer generated "predictive policing," zones at the Los Angeles Police Department Unified Command Post (UCP) in Los Angeles. Police officials say they are having success with a computer algorithm model that helps determine where to send officers to prevent or possibily interrupt a crime, which may serve as a model for other cash-strapped law enforcement agencies. (AP Photo/Damian Dovarganes)

"If you are victimized today the risk that you'll be a victim again goes way up," said Brantingham, who co-founded a software company tapped by LAPD for its program.

So far, the program has been implemented in five LAPD divisions that cover 130 square miles and roughly 1.3 million people. In the valley's Foothill Division, where more than half of the crimes committed are property-related, about 170 patrol officers are spending a total of about 70 hours a week working in the boxes.

In one instance, a police captain questioned sending officers into a box that was on the edge of his coverage area. Officers went out and didn't find anything, but returned several nights later and found a guy breaking a window.

The division leads the department in crime reduction, Malinowski said. Crimes were down in the area 13 percent following the rollout compared to a slight uptick across the rest of the city where the program wasn't being used.

"If you had told us a few years ago you could get an algorithm to perform as the same as a crime analyst, we would think you were crazy," Malinowski said. "Even the most skeptical people are now coming up to me and saying, 'I think this is working.'"

Other police departments across the nation are using similar approaches. Tech titan IBM has teamed up with police in Memphis and Charleston, S.C., to provide analysis; Minneapolis police are breaking down crime statistics and factoring in geographic locations to determine future crimes.

Andrew Guthrie Ferguson, an assistant law professor at the University of the District of Columbia, has written about predictive policing and how it may impact Fourth Amendment protections from unlawful searches and seizures.

Ferguson said the trend is "a seductive idea" for law enforcement agencies that carry a lot of power. He believes the LAPD has done a good job with the data but he's concerned that other departments could abuse the process with racial profiling or stereotyping a neighborhood or an area.

"There are real pressures to expand this nationally and see it succeed," Ferguson said. "I think it's an important innovation. But like any innovation, it's not foolproof, and looking closely at the data is important to ensure it doesn't harm the civil liberties of the people living in those areas."

Ferguson said he envisions a legal challenge at some point. He used an example of an officer patrolling a predicted area of burglary and who sees a man carrying a bag and detains the man because he looks suspicious.

"Alone, a man carrying a bag is not reasonable suspicion," Ferguson explained. "But in court, the officer will say, 'The computer told me to go there.' For the lawyer or the court, what are you going to do with this information? You can't cross-examine a computer."

Brantingham's company has been contacted by about 200 police departments across the globe interested in the software. He wouldn't disclose the costs of the program because it varies on a city's population and size. LAPD isn't incurring any costs because it has shared data and other information with Brantingham's company for research purposes.

Brantingham and others believe predictive policing is the wave of the future and won't result in the elimination of jobs.

"It's not a replacement for police officer's knowledge and skills and not designed to take the officer out of the equation," he said. "It's about putting them in the right time and place for crime prevention."