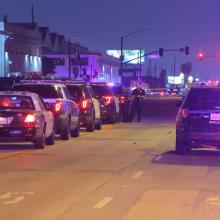 LAPD and L.A. County Sheriff’s vehicles line up near the scene of a shooting in South L.A. on Saturday, April 20 that left an officer and a suspect injured. (Raphael Richardson/Special to SCNG)
Josh Cain, Los Angeles Daily News
Daily Breeze

Police officers chasing a man in South Los Angeles late Saturday got into a brief gunfight with another man who appeared in their path armed with a gun, officials said.

The shooting left one of the officers and the suspect injured, Los Angeles Police Department officials said.

The officer was reported by officials to be stable Sunday after undergoing surgery at L.A. County-USC Medical Center.

The suspect was also taken to a local hospital. Police did not immediately update his condition on Sunday.

The foot chase started after LAPD officers with the Newton Area gang unit stopped a driver in the area of East 51st Avenue and West Long Beach Avenue at around 9:10 p.m., according to Lt. Meghan Aguilar, an LAPD spokeswoman.

The driver got out and fled. The officers pursued him for about 100 to 150 yards. That’s when they ran into the second man, LAPD said in a statement on Twitter.

The officers saw that the man was armed with a gun, and the shooting occurred.

Police recovered a firearm at the scene, Aguilar said.

The LAPD had initially said two men were in the car.

“After gathering some evidence, investigators determined there was only one occupant of the vehicle, who ran after his vehicle was pulled over by the officers,” police said in the statement.

During the chase, “another man appeared, armed with a firearm & there was an exchange of gunfire between an officer & suspect.”

The chase and shooting resulted in a citywide tactical alert being issued late Saturday. A perimeter was set up around the area as police searched for the driver.

He was not found. LAPD officials said the search was called off after investigators determined the driver was not the man who shot at the officers.

But officials said on Twitter that they were still trying to identify the driver. Police did not say whether he was suspected of a crime and have not provided a detailed description of him.

Los Angeles Police Chief Michel Moore responded to the shooting on Twitter on Sunday. Just last month, Moore said he was concerned with a recent spate of violence in South L.A. that left 11 dead in shootings across the area.

“Gang officers, who are given a tough and dangerous job, confronted every officer’s worst fear — gunfire,” Moore said. “One of the officers was shot and rushed to a local area hospital where he’s now in stable condition. Please keep him and his family in your thoughts and prayers.”

Saturday’s shooting was the first this year in which an officer was shot; and only the fifth so far by an LAPD officer this year. By this point in 2018, there were already 11 officer-involved shootings citywide.