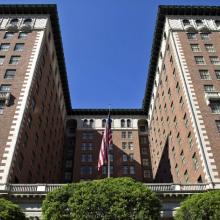 Scores of Los Angeles police officers who have symptoms related to the coronavirus or who must quarantine because of possible exposure have the choice of self-isolating at home or moving into the Biltmore Hotel in downtown L.A., according to two law enforcement sources.

The officers will be housed on at least two floors of the iconic Pershing Square hotel, a move that the LAPD has kept under wraps from the public, the sources said. The accommodations are not being covered with taxpayer funds but are paid for by the Los Angeles Police Foundation, a nonprofit independent group that buys police equipment and offers other support to the LAPD.

Staff of another city agency, the Los Angeles Fire Department, will self-isolate or quarantine in fire station community rooms, which are used mainly as classrooms, according to Capt. Branden Silverman. The ad-hoc facilities, which are in separate buildings from the stations, are equipped with bathrooms and showers and have been furnished with cots, although Silverman said nearly all of the LAFD staff have been able to self-isolate at home.

“We’re preparing for a huge influx of department members becoming ill,” Silverman said. “We definitely needed to have that logistical setup ready, but we have not been as impacted as the East Coast fire departments.”

Josh Rubenstein, a spokesman for the LAPD, asked The Times not to publish the location of the hotel, citing officer security concerns.

The LAPD was trying to make its officers’ presence at the Biltmore as low key as possible, sources said. One source said that although the hotel has a reputation for luxury, that was not the primary reason for its use.

Rubenstein said the hotel was selected for its central location and a prior relationship with the department.

“It fits the bill for what we need for our officers,” Rubenstein said. He referred questions about the cost of the rooms to the Police Foundation.

Rooms at the Biltmore typically run about $180 and up per night, plus taxes. The hotel has advertised a special discount for government employees, $120 per night. It’s unclear what the hotel was charging.

LAPD Chief Michel Moore announced the hotel accommodations in a video message to staff on April 9, although he did not identify the Biltmore by name.

“The dangers you face in coming to work while others are staying at home are not lost on me. I thank you for your continued commitment mission of keeping the city safe and healthy,” Moore said in the video.

Moore said that as part of the plans to keep LAPD officers safe, he worked with leaders from the officers’ union, the Los Angeles Police Protective League, to identify a suitable hotel in downtown L.A. The hotel was to be used by those who test positive, who are starting to experience flu-like symptoms, or who are awaiting test results or otherwise must go into isolation based on possible exposure.

“This rest and isolation center has been made possible by a generous donation from the Police Foundation, and hotel accommodations will be provided at no cost to you. Our first preference is for you to stay at home. However, I recognize that may cause you even more stress and the potential risk to those you love. So these accommodations are for you,” the police chief said.

In the video message, Moore said that the LAPD learned of its first positive COVID-19 case on March 15. A week later, he said, it grew to three cases. Now, more than 400 employees have been tested.

As of Wednesday, 57 LAPD employees had tested positive for the coronavirus, with 17 recovering and returning to work. One individual was hospitalized. The rest were self-isolating, officials said.