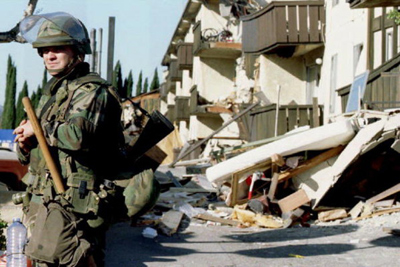 A National Guardsman stands outside the ruins of the Northridge Meadows Apartments where 16 people died on Jan. 17, 1994. (AFP / Getty context)

Nineteen years after the 1994 Northridge earthquake, the Los Angeles Police Department Tuesday will honor a man who helped rescue a police officer who was trapped in his apartment after the temblor.

Michael Kubeisy, 53, will be honored at the Police Commission meeting for his bravery in the immediate aftermath of the quake, which struck at 4:31 a.m. Jan. 17, 1994. The quake collapsed freeways, injured thousands and caused the deaths of nearly 60 people. It caused about $20 billion in damage.

Kubeisy, now a still photographer for the CBS television show "NCIS," rushed to help neighbors in his approximately 150-unit, three-story Northridge Meadows Apartments, the first floor of which partially collapsed.

After bridging a nearly three-foot crevice that opened up in his own apartment, Kubeisy said he first assisted an elderly neighbor down a chain ladder then moved to the door of LAPD officer Joseph Jordan and his wife. The door was sealed shut, but Kubeisy could hear Jordan and his wife were OK. He eventually pried the door open, and he blew out a candle the couple was burning-a major hazard given a gas leak caused by the quake.

Kubeisy and Jordan would go on to help other neighbors.

"And that was the last time I saw him," Kubeisy said.

The two met again during a later interview. Jordan died of a heart attack in 1996, according to the LAPD.

He was honored in the days after the quake by then-President Bill Clinton, but "the LAPD has never properly thanked Mike for rescuing Officer Jordan," according to the department.

Kubeisy shrugged off the honor.

"The only reason I'm agreeing to go through with this-it's not for me-I want my teenage boys to see firsthand that when you deny yourself for the betterment of someone else, even 19 years later, you get the 'atta boy' sometimes," he said.