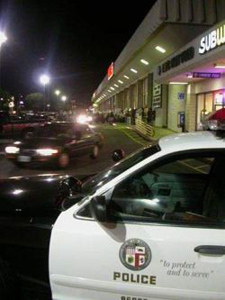 Special Order 7 was aimed at lessening the financial burden on drivers who have their cars impounded for as long as month for driving without a valid license.

The Los Angeles Police Protective League, the union representing about 9,900 rank-and-file LAPD officers, and the group Judicial Watch opposed the moved and sued to stop it.

"I think the issues are common in both cases,'' Green said. "I don't see what the prejudice is. We should have one court hear them.''

The judge did not set a date for trial, pending a ruling on a motion by the Coalition for Humane Immigrant Rights of Los Angeles and LA Voice to intervene in the lawsuit in defense of Special Order 7. A hearing is scheduled Sept. 25.

In the May 16 lawsuit filed by Washington, D.C.-based Judicial Watch, plaintiff Harold Sturgeon of Los Angeles wants a judge to find that the department's recently relaxed impound policy is an unlawful use of taxpayer money "to help unlicensed illegal aliens.''

But CHIRLA/LA Voice court papers argue that without Special Order 7, people who are not U.S. citizens and who cannot get California driver licenses would be disproportionately affected by 30-day impounds. Charges can amount to more $1,000.

In February, the Police Commission, which set LAPD policy, approved the executive order, which enables an officer to let an unlicensed driver stopped for a moving violation avoid a 30-day impound, as long as he or she has valid identification, vehicle registration, proof of insurance and a clean driving record.

A driver at fault in a wreck or who has conviction for unlicensed driving would not qualify for a shortened, one-day impound.

Chief Charlie Beck proposed the policy, with the backing of immigrant rights groups and Mayor Antonio Villaraigosa. In May, Beck said the old policy of impounding vehicles for 30 days unfair to undocumented immigrants.

Beck has said the change was an attempt to eliminate officer confusion over conflicting laws on impounding vehicles and for how long.

Between April 22, when Special Order 7 took effect, and May 8, mandatory 30-day impounds dropped by 45 percent, compared to the same period in 2011, according to the police union.

LAPD Cmdr. Andrew Smith said he could not verify the union's figure, but that police were analyzing towing and impound data.