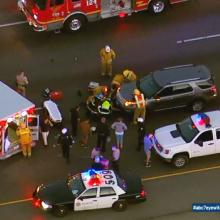 A Los Angeles police motorcycle officer is in serious condition Tuesday after crashing on the 5 Freeway in Valencia and being run over by an SUV that was behind him.

The accident happened near Lyons Avenue around 5:15 a.m. Chief Charlie Beck said the officer was on his way to work when he got tangled in a blue tarp that came loose from a large pickup truck.

Beck said the officer lost control, crashed and was then run over by a car that was behind him. The driver of that car was an LAPD employee.

"I ask everybody's thoughts and prayers to be with him. A very experienced motor officer who has a great record with the Los Angeles Police Department and everybody should be very concerned about his condition," Beck said during a press conference.

Emergency crews took several minutes rescuing the officer, who was pinned underneath the gray SUV on the freeway. He was placed in an ambulance and transported to Henry Mayo Hospital.

According to the LAPD, the officer was in serious condition, but he was conscious and speaking. Beck said he will need several surgeries for multiple broken bones.

The officer lives in Santa Clarita and his family is being flown in from another area to see him, Beck said.

The freeway was shut down for several hours after the crash for an investigation and cleanup.