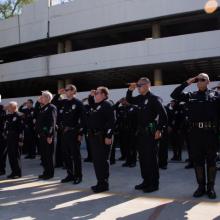 Although some police critics have said such warnings could discourage citizens from filing legitimate complaints, supporters say the unsubstantiated ones hurt the careers and reputations of officers.

A judge has tentatively ruled that the Los Angeles Police Department must warn people that deliberately filing false complaints against officers is a misdemeanor under the law, a practice the city maintained was unconstitutional.

The judge issued a permanent injunction prohibiting the LAPD from accepting an allegation of misconduct against an officer unless the complainant reads and signs the advisory warning the person that filing false complaints is illegal.

Broadbelt conducted a non-jury trial of the issues in January and the attorneys filed their closing briefs the next month.

In his tentative ruling issued Nov. 26, Broadbelt noted the testimony of Officer Steve Gordon, who told him that gang members have used the civilian complaint process to target officers and remove them from the gang members' areas.

The judge set a hearing on an entry of judgment for Jan. 30.

Although some police critics have said such warnings could discourage citizens from filing legitimate complaints, supporters say the unsubstantiated ones hurt the careers and reputations of officers.

Lawyers for the City Attorney's Office maintained there was conflicting law at the state and federal level on whether police agencies are required to issue such warnings to persons filing complaints.

They further argued that the law was based on the earlier premise that there's no First Amendment protection for deliberately making false statements, but the U.S. Supreme Court concluded otherwise in 2012 and thus the law requiring the warning violates what is now constitutionally protected speech.