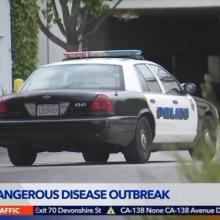 A Los Angeles police station was being disinfected Wednesday after officials learned one officer was sickened with typhoid fever and a second employee was exhibiting salmonella typhi-like symptoms.

The employees both work in LAPD's Central Division, which patrols most of downtown L.A. and Chinatown as well as parts of Echo Park and Elysian Park, Officer Mike Lopez with the agency's media relations department said.

The person with typhoid fever is being treated for the life-threatening disease, caused by the bacterium salmonella typhi, the department said in a news release.

The illness is not common, with only about 350 people in the U.S. diagnosed with typhoid fever each year. Usually people contract it after traveling abroad to places like India, Bangladesh and Pakistan, according to the Centers for Disease Control and Prevention.

The fever is spread by coming into contact with the bacteria, which is excreted in feces, the CDC says.

A specific diagnosis has not been determined for the other staffer, who has salmonella typhi-like symptoms, LAPD said.

Earlier this year, a typhus outbreak was declared at L.A. City Hall, and video emerged of rats scurrying through the downtown government building. Typhus is usually spread through contact with infected fleas and lice.

The department would not confirm whether the employees work as officers, but noted in a news release that "our police officers often patrol in adverse environments and can be exposed to various dangerous elements."

The LAPD labor union identified the person with typhoid fever as a sworn officer.

“At this point we don’t care who is at fault, we just want these toxic work sites cleaned and sanitized," the L.A. Police Protective League said in a statement. "Officers worry enough about being shot or injured policing the streets of Los Angeles, they shouldn’t also have to worry about being infected with diseases they can take home to their families simply by showing up to work. Our demand is simple; clean it up and provide preventive measures before there is a massive outbreak.”

LAPD said it is working to disinfect any work areas that may have been exposed at the Central Division, and it expected the station to be completely cleaned by Wednesday evening.

MRSA, or methicillin-resistant Staphylococcus aureus, is an antibiotic-resistant bacteria that can cause skin infections, and sometimes pneumonia. It's spread by sharing infected personal items such as towels or razors and may be connected to the opioid epidemic, the CDC says.

Also this month, an LAPD jail in Del Rey temporarily shut down because of a bed bug infestation. The parasites feed on the blood of sleeping people and animals, causing itching and sometimes allergic reactions, according to the CDC.

Editor's note: LAPD initially said one of its officers was showing "typhus-like" symptoms, but later clarified them as "salmonella typhi-like symptoms."