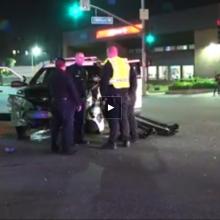 A Los Angeles Police Department officer and another driver were in the hospital following a crash near Koreatown Friday night.

The crash occurred around midnight near Western Avenue and Olympic Boulevard, according to LAPD Olympic Division officials.

Police said an officer was responding to a domestic violence call when it went through the intersection with lights and sirens blaring, but a person in a car failed to see the officer and crashed into his vehicle.

Both the officer and the driver of the car were transported to a nearby hospital with complaints of pain.

Both were expected to recover from their injuries.