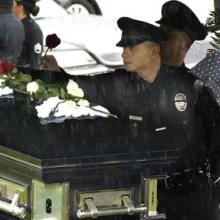 Click here to view more images from the funeral.

Hundreds of people, including many law enforcement officers, congregated at Forest Lawn-Hollywood Hills cemetery's Hall of Liberty, where the 30-year-old Monroe, of Simi Valley, was remembered for her energetic charisma, her strong commitment to family and her "confident swagger" at work.

Monroe's elder sister Amber Monroe, who spoke on behalf of her family, said her sister had the "spirit of a wolf," was "always ready to protect those close to her heart" and "never backed down when things got hard."

Monroe was pronounced dead at the scene after the Scion tC she was riding in collided with a Nissan Maxima driven by an Uber driver at a Simi Valley intersection shortly after 2 a.m. on Jan. 1, according to Simi Valley police. The driver of the Scion, the driver of the Maxima and a passenger in the Maxima were taken to an area hospital with nonlife-threatening injuries and released.

Thursday's funeral ceremony included the playing of a bagpipe, a photo montage of Monroe, a gun salute, and plenty of stories about the San Fernando Valley native.

LAPD Officer Joel Trask, who was Heather Monroe's longtime partner at the Devonshire Division and a close friend, said she was the same person both on and off the job.

"On numerous occasions when we responded to calls involving a search for a dangerous suspect - going to rooms or homes - she would always push me out of the way and say, 'I'm going first, partner. You have to go home to your kids.' It's just the kind of person she was."

Capt. Brian Pratt, commanding officer of LAPD's Devonshire Division, said Monroe lived with "a zest and energy every day of her life" and would want those who knew her to focus on her legacy rather than the tragedy of losing her.

When she started working at the Northridge-based Devonshire Division in April 2015, "she was immediately recognized by her leadership team as a hustler in patrol and an energetic leader on the bike detail," Pratt said. "She loved the bike detail, loved working the Balboa and the Reseda corridors and put her heart and energy in that position."Advertisement

Monroe loved her chosen profession and cherished the friends and partners she made during her 7-1/2-year career with the LAPD, in which she cut her teeth at the Olympic Division and spent a few months at the jail division before moving to the Mission and ultimately Devonshire divisions, he said. In fact, the athletic Monroe was so well respected that in less than two years at the Devonshire area, she was selected as Officer of the Quarter four times and was promoted to field training officer in March of last year, he said.

Simi Valley police said they know how the New Year's Day collision occurred but are waiting for lab results for the driver of the Scion tC, which will check for any alcohol or drugs in her system, as is standard procedure, before commenting, said Cmdr. Robert Arabian of the Simi Valley Police Department. The car was driven by Monroe's wife.

Police have already determined that the Uber driver was not under the influence, he said. Arabian previously said that one of the vehicles apparently ran a red light but that speed did not appear to be a factor.

Heather Monroe's wife of more than two years, Alayna Monroe, said in a speech that was read by her father, Robert Moore, that her wife taught her to love unconditionally, to give and to share.

"You completed me, my perfect match, you challenged me, encouraged me, you pushed me and never let me fail, and if I faltered, you never let me give up," she said. "You are the rock in my life and always have been."

A GoFundMe.com account has been set up to support Alayna Monroe, who was injured in the collision, with her medical expenses and other costs related to her wife's death at www.gofundme.com/monroe-family-recovery-fund.