The LAPD officers were honored for chasing and arresting Ian Schlesinger on September 12, after he allegedly carjacked a vehicle then led police on a pursuit from North Hollywood to downtown Los Angeles, according to the LAPD.

The dramatic pursuit ended when Schlesinger was injured in a shootout with police.

He was later booked for homicide, attempted homicide on police officers, carjacking, robbery, assault with a deadly weapon, and other felony charges. 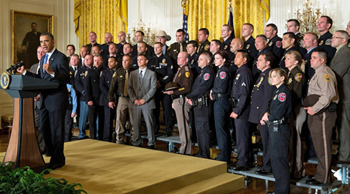 In addition to members of the LAPD, officers from other parts of California, Illinois, Iowa, Florida, Indiana, Nevada, New Jersey, New York, Texas and Wisconsin were also honored.

During the ceremony, Mr. Obama praised the nation's police officers for their bravery and for signing up, "to do some tough stuff."

Below are the names of the LAPD officers who were recognized: