A baby boy who wasn't breathing was saved by two fast-acting police officers in South Los Angeles when they noticed the child's mother driving erratically in her desperate search for help, officials said Tuesday.

On Saturday about 1:30 p.m., Los Angeles Police Department Officers Johnny Han and Andrew Cardenas were on patrol near Broadway and 76th Street when the woman began to honk her horn behind them.

The woman, Charmaine Gooden, told officers that her 17-month-old child, Javon Stevenson, had stopped breathing, police said. That's when the officers hopped out of their car and took action. 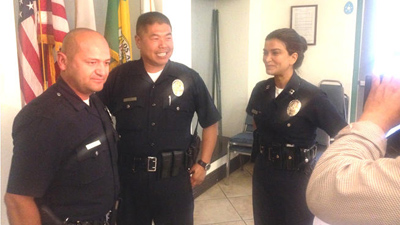 It was that chest compression, doctors said, that saved the baby's life.

Paramedics arrived and took Javon to the hospital, where he was listed in stable condition.

Doctors said the boy had suffered an acute life-threatening event.

On Tuesday, Javon reunited with the officers who saved his life. The officers were congratulated by colleagues for their actions.

"I feel real happy, I feel blessed," Gooden said. "It's emotional for me to see your baby like that."

Not all police officers are required to take EMT training, but Cardenas did and made use of it to save a child's life.

"Everybody is extremely proud about their performance and they are our local heroes," Capt. Lillian Carranza said.