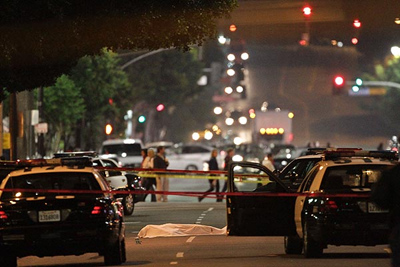 The officers "put themselves directly in harm's way, face to face with this suspect. They absolutely saved the lives of an untold number of people, who unknowingly were headed toward the violence," Villaraigosa said at a press conference to honor the officers.

The Dec. 9 shooting rampage was shocking for its random and brazen nature. Around 10:30 in the morning, 26-year-old Tyler Brehm walked into the middle of the intersection of Sunset Boulevard and Vine Street, armed with a handgun, and opened fire at people as they drove by. Brehm fatally wounded one man and injured two other people.

Officer Kevin Cotter, who was off-duty, heard the shots from a nearby movie set where he was working a side job. Det. Craig Marquez and Officer Travon Dixon were at a coffee shop a few blocks away when frantic witnesses ran up to them with word of the gunfire. The three officers converged on the scene and found Brehm still shooting.

Brehm ignored orders from Cotter and Marquez to drop his weapon, witnesses said. When he pointed the gun at the officers, they shot and fatally wounded him.

Beck commended the officers for jumping into action in without hesitation despite the circumstances. Cotter was without his police radio and so had no idea what he was running into. The other officers were in plainclothes, had no protective vests and "were expecting a routine day of detective work," Beck said.

"It's one thing to go into a situation when you're fully prepared, fully briefed, have all the information you need," he said. "It's another thing when a murderous rampage causes you ... to go forth and directly challenge an armed gunman who has already taken someone's life. That's heroism."

The mayor and chief also recognized several security officers from the Hollywood Business Improvement District who responded to the scene as well.

Marquez, who has served on the LAPD for 16 years, spoke on behalf of the other officers. He humbly downplayed all the talk of heroics. "I don't think we're heroes. I would like to think the 9,000 officers who wear this badge everyday would have done the exact same thing in that situation."