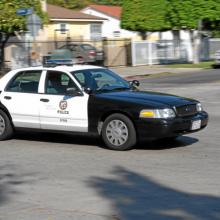 The Los Angeles Police Department is doing away with around-the-clock front-desk hours, aiming to put more officers into the field to respond to calls.

Starting Friday, Dec. 1, a pair of stations in the San Fernando Valley — Devonshire and West Valley — and the Southeast and Southwest stations in South Los Angeles shift from a 24-hour front-desk schedule to a 7 a.m. to 11 p.m. schedule, LAPD officials announced.

“There’s not a lot of action in the middle of the night with these officers,” he said. “The much better use for them is on the street.”

A tweet from the official LAPD account originally said the new schedule kicked in Nov. 20, though the department later announced the start date as Dec. 1.

Rubenstein said that for each of the divisions that reduces its hours, three police officers will be re-assigned to work patrol in their own areas, which translates to 48 officers put into the field.

It will be up to the commanding officer of the area to decide what officers will be doing, he said. “There are all kinds of ways you can deploy those officers for different projects and assignments,” he added.

Even though front-desk hours will be reduced, police officers in each division will still respond to calls as part of a 24-hour schedule.

“Red call boxes” will be positioned at the front of the stations for members of the public to use in emergencies, when the front desk is not staffed. Those phones will direct callers to 911 dispatchers.

The initial four stations were chosen because they have telephone systems that can re-route callers to the appropriate departments, Rubenstein said.

The reduced hours will be rolled out as the telephone systems are made available at more stations. Divisions that have jails — such as the Central, Van Nuys and 77th divisions — will maintain their 24-hour front-desk hours, according to Rubenstein.

Some criticized the new plan Monday, saying more needs to be done to address a larger problem of too few police officers deployed to the field.

Tom Saggau, a spokesman for the police union, said there is “no debate” that Los Angeles “needs more police officers on the street” and that the “limited station closures are intended to put more officers on patrol in these neighborhoods.”

“But this action is also the latest validation of the dire patrol staffing crisis faced by the LAPD,” he said.

Angelenos should not have to “choose between a fully functional neighborhood police station versus having enough officers available to respond to emergencies,” he said.

“Two audits have been performed on civilianization, (and) the mayor and City Council have given direction to the administration several times to move quicker but the civilian hiring process continues to eke along at a snails pace,” he said.