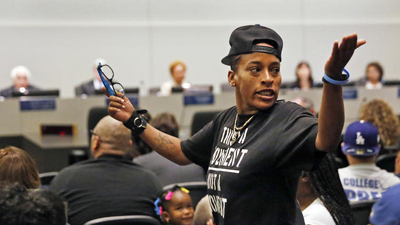 Craig Lally, the president of the union that represents rank-and-file LAPD officers, and other union officials were blunt as they addressed the L.A. Police Commission during the panel's first public meeting since it decided last week that one officer was not justified in fatally shooting Ford, even though the officer was in a struggle with Ford over control of his gun.

"This decision and the faulty reasoning behind it was irresponsible and [has] the potential of putting our officers at risk," Lally said.

Lally singled out Commissioner Paula Madison for comments she made on KNBC this weekend, when she said that officers should understand that use of force laws have changed, much like laws that once allowed slavery or prevented women from voting. "It is a very different world today," she said.

Lally said the comparison "had nothing to do with the situation of Ezell Ford" and called Madison's remarks "disturbing and insulting."

The remarks came during another animated weekly meeting of the Police Commission, which was also attended by some activists who have demanded LAPD Chief Charlie Beck be fired for his handling of the Ford case. Although the commissioners ultimately decided one officer violated LAPD policy during the shooting, Beck had recommended that both officers involved be cleared.

One man drew applause as he taunted Beck, telling the chief "your days are numbered." The man then took a fistful of change from his pocket and threw it in the air, saying it was for Beck's retirement fund.

But the mood wasn't always angry. Another activist, Najee Ali, presented what he described as a "certificate of courage" to commissioners for showing "courage and conviction" in last week's decision.

The most tense moment came after Lally described Ford as a "known gang member," prompting many in the audience to shout at the union president and accuse him of slander. "That's not right!" one woman in the audience yelled as another began chanting, "Black lives, we matter here."

Madison threatened to temporarily halt the meeting -- as the commission did last week -- if the audience continued to interrupt speakers.

The LAPD has not said whether Ford was affiliated with any gang, and Beck refused to comment to reporters after the meeting Tuesday. When asked whether her son had any gang affiliations, Ford's mother told The Times earlier this month, "Not that I know of."

Redacted copies of investigative reports made public last week mentioned that the officers had stopped Ford in a South L.A. neighborhood known for gang activity, but did not mention any gang involvement by Ford.

The Aug. 11 death of Ford, who was African American, became a local touchstone in the heated national conversation about police officers and their use of force, particularly against black men. Ford, who had been diagnosed with bipolar disorder and schizophrenia, died two days after the fatal police shooting of Michael Brown in Ferguson, Mo.

A 10-month review of Ford's death came to a dramatic conclusion last week when the commission ruled that one of the officers who fatally shot Ford acted out of policy.

The officer had been in a struggle with Ford over the officer's holstered handgun when the shooting took place, Beck concluded. Although the officer may have been in a fight for his life, the commission decided he did not have a reason to stop and detain Ford in the first place. His handling of the encounter, the commission concluded, was so flawed that it led to the fatal confrontation.

The officer's partner was found far less culpable. The panel disapproved only of that officer's initial decision to draw his weapon early on in the confrontation, but said he ultimately was right to fire at Ford in an effort to protect his partner.

The commission's decision to look at what it described as the "totality of the circumstances, and not just the moment in which force was used," marked a significant milestone in the way it evaluates police shootings. When judging the decision to use deadly force, the commission previously took a narrow approach, asking only whether officers faced a deadly threat at the moment they opened fire.

It is now up to Beck to decide whether to discipline the officers.

After Tuesday's meeting, the chief said he believed communication was a key way for those rattled by the decision -- officers, the union and the community -- to move forward.