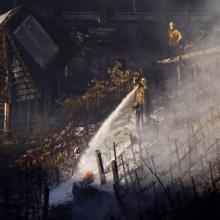 Firefighters work a hot spot next to a charred vineyard caused by the Skirball fire in Bel-Air in Dec. 2017. The fire started by an illegal cooking fire in a homeless camp.(Genaro Molina/Los Angeles Times)
Richard Winton
LA Times

The city earlier this year passed an ordinance that makes it easier to clear homeless camps during fire danger periods.

The National Weather Service has issued red-flag warnings for parts of Southern California, saying there is a “critical fire danger” Thursday and Friday.

Los Angeles is particularly vulnerable to fires that start in hard-to-reach areas and then spread. In December 2017, for example, the Skirball fire was sparked by a cooking fire at a homeless encampment in a canyon several hundred feet from Sepulveda Boulevard and the 405 Freeway, hidden from passing cars.

The Skirball fire moved through the hills of one of L.A.'s richest ZIP Codes — in Bel-Air — and destroyed six homes. Though the blaze burned just 422 acres, it was notable because of how it started.

Months later, a Bel-Air synagogue sued the city and the County of Los Angeles, arguing that authorities had failed to clear the homeless encampment where it began. The case is ongoing.

More recently, a large fire in the Sepulveda Basin displaced dozens of homeless people and required 100 firefighters and two helicopters to put it out.

Southern California Edison said that, given the strong Santa Ana winds forecast for the area, power could be cut off to more than 173,000 customers in parts of eight Southland counties.

The outage could affect customers in Los Angeles, San Bernardino and Riverside counties, as well as areas in Ventura County and portions of Kern, Tulare, Inyo and Mono counties.