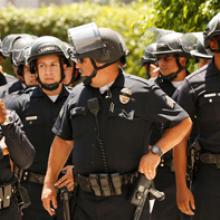 The Los Angeles Police Department will increase helicopter patrols and the screenings of 911 calls in the wake of the fatal shootings of three Baton Rouge officers, Los Angeles Mayor Eric Garcetti announced Sunday.

Under the move, the LAPD will also shift Metropolitan Division officers to help back up patrol officers.

"Today, we are adding resources to make sure that our Los Angeles Police Department and other public safety agencies are supported," Garcetti said in a statement.

The boost in resources comes after two Baton Rouge police officers and one East Baton Rouge sheriff's deputy were shot and killed Sunday morning. Several other officers were also injured before the suspect, identified as 29-year-old Gavin E. Long from Kansas City, Mo., was shot by police.

"I condemn this violence in the strongest possible terms. There is no justification for the taking of the lives of officers who were in their communities doing their job today," Garcetti said in a statement, calling the recent shootings targeting law-enforcement officers "a horrifying trend."

The Louisiana killings follow the death of Alton Sterling, a 37-year-old black man who was shot by police July 5. On July 6, Philando Castile, a 32-year-old black man, was shot by a police officer in Minnesota during a traffic stop. One day later, a gunman killed five police officers during a Black Lives Matter protest in Dallas in apparent retaliation for the deaths of Sterling and Castile.

The Los Angeles Police Protective League issued a statement decrying "the platitudes and 'rhetorical support' for law enforcement" and issued a call for more concrete action.

"In just over one week's time, this nation has seen its law enforcement officers targeted, hunted and murdered again," the league said in the statement. "We cannot keep our neighborhoods safe if the men and women we ask to protect our communities face ambush around any potential street corner."

Los Angeles Police Chief Charlie Beck called for more dialogue even as he condemned the violence against law enforcement officers.

"The events that have triggered this national discussion about policing in America are necessary, but must be free of violence if meaningful change is to be achieved," Beck said in a statement.

Beck sent an internal video to officers Sunday following the deadly shooting in Baton Rouge, explaining the heightened safety measures the LAPD has taken to protect police as they respond to calls.

"After the horrific news of what happened in Baton Rouge, I became extremely concerned for all of our safety - particularly yours," the chief told his officers in the 51-second clip, a copy of which was reviewed by The Times. "I don't see any nexus to California yet, but I want to make sure that we're as safe as we can be."

In addition to moving the department's elite Metro officers from crime suppression details to backing up patrol officers, Beck said 911 calls would be "carefully screened to avoid rouse calls" that could draw more officers to a scene.

"Be careful," the chief said, a black mourning band covering his badge. "Watch your back. Watch each other."