She was dressed in a body-hugging top and tiny miniskirt with torn fishnets and black boots - drawing lingering stares from men and disgusted head shakes from women driving on a busy stretch of North Hills. | See photo gallery. 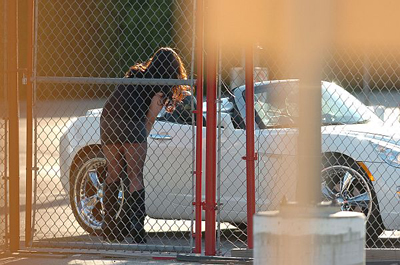 An LAPD officer posing as a prostitute talks to a driver during a sting on Friday, Feb. 17, 2012. The sting is part of an effort by the Devonshire Division to target a crime-ridden 7-square-mile area of the north San Fernando Valley. (Andy Holzman/Staff Photographer)

What appeared to be another prostitute on the corner by the Motel 6 - a spot known to be frequented by hookers - was actually an undercover cop setting up a sting. Three men were arrested in three hours, a relatively slow day, but one which nonetheless made the point to johns: Don't come back here.

The effort was part of a new comprehensive strategy by the Los Angeles Police Department to target quality-of-life issues in one of the most crime-ridden pockets of the north San Fernando Valley.

A 6.9 square-mile block - bounded by the San Diego (405) Freeway, Rinaldi Street, Balboa and Roscoe boulevards - has accounted for up to 35 percent of the crime in LAPD's Devonshire Division, which overall encompasses about 51 square miles.

Among them: Prostitutes living in motels. Drug deals going down in parks and out of homes. Parolees being released into the neighborhood as part of the state's realignment plan. Break-ins into cars and homes while residents are at work.

"So much crime is generated in a small place," said Capt. Kris Pitcher of LAPD Devonshire, which patrols the north San Fernando Valley. "There are a lot of problematic locations."

So with a goal of narrowly focusing on that particular area, Devonshire has launched a new plan that seeks to drop overall crime by 15 percent in the area by the end of the year.

The Community Enhancement Program has already reduced crime by 14 percent in the area since it launched Jan. 1, according to Pitcher. If it continues to prove successful, it may eventually be used to target other problem areas.

But maintaining that pace all year remains an ambitious goal. Devonshire already posted a 15 percent drop in major crimes last year, ranking second across the city. And LAPD Chief Charlie Beck has set a goal of only a 5 percent reduction in crime across the city.

The strategy also relies on quicker analysis of crime data to spot trends immediately. Officers review reports on a daily basis to spot problem areas and dispatch specialized units such as vice, narcotics and gang enforcement, rather than wait what for could be a week's lag involved in the department's normal crime analysis.

Any intelligence gathered from community tips or by detectives working on crimes is shared with all units.

The specialized units supplement the normal patrols in the area and can be shifted to target sites of increased crime activity.

"We try to deploy into the areas with most impact with the minimal number of officers," said Sgt. Jose Torres. "With limited resources, we want to reallocate them with specific missions so there's a higher probability of coming across a crime."

The area is made up mostly of residential homes, but includes a mix of light-industrial and commercial businesses, parks, schools, sober-living homes and the Veterans Administration facility.

Several parks are often frequented by narcotics users and dealers and that has led to a rash of burglaries around those locations, according to Pitcher.

The corridor that runs along the 405 Freeway includes motels where pimps rent rooms for their prostitutes, then solicit johns from major throughways such as Sepulveda Boulevard to the east.

While most of Devonshire doesn't have much streetwalker activity, the Motel 6 on Roscoe Boulevard is known by locals to be a sort of staging area for prostitutes, who shower, sleep and stay for days, according to police. 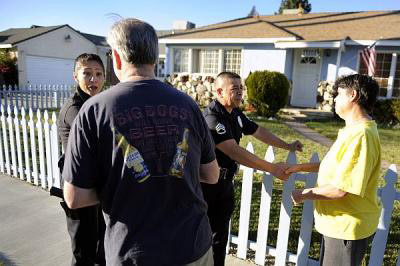 LAPD Sgts. Ruthann Scott and Jose Torres talk with Granada Hills residents after arresting a parolee. The Devonshire Division is trying to cut crime 15 percent by focusing on a small area responsible for 35 percent of crime in the division. (Michael Owen Baker/Staff Photographer)

The prostitutes will cross under the adjacent 405 Freeway bridge - into neighboring LAPD divisions - and head over to Sepulveda Boulevard, a stretch infamous for such activity that often spills into nearby residential streets, leaving used condoms and wadded tissues for neighbors to find.

"We target this location because we know johns know this area as a place adjacent to Sepulveda where they can pick up a prostitute," said Sgt. Ed Arca. "Especially on a Friday, Saturday, we know it'll be busy."

The three arrests police made included a man who walked up to solicit services of the undercover cop, interrupting another prostitute who was trying to recruit her to work for her own pimp. Several men had also driven up, asked for a price and left, saying they'd be back, but did not return.

Another man who had been previously arrested in a similar sting recognized the cop, flipping her the bird as he drove by.

"We just want this area to be clean," said Monica Marroquin, who works at a furniture store with a clear view of the driveway. "Because it makes us look bad."

Also near the freeway are what officers call "tweaker pads," homes where drugs - mostly methamphetamine - are dealt, attracting an unsavory element as well as home invasions and robberies.

One empty lot at the end of a dead end on Aqueduct Avenue had become an illegal dumping ground that did not faze prostitutes and drug dealers from doing their business among the debris.

Gang officers have also had to deal with members of the Langdon Street gang, who face a city injunction in the North Hills area that prevents them from gathering in public. While gang activity has been low, gang members from other areas of the city have come into the area, police said.

"It's a longstanding crime problem," Pitcher said of the area. "It's very worthy of our attention and a cornerstone of our effort for 2012."

The officers also work closely with the city's neighborhood prosecutors.

"It may or may not be attributed to that sober-living facility, but the perception of the community is that it is," Feiman said. "And if we address the sober-living problem in the house ... hopefully it will decrease the nuisance in the community as a whole."

Officers have also partnered with some of the problem motels to check registries for parolees or any suspicious activity.

Part of the program included creating another 10 neighborhood watch groups in the area.

"It seems to be making a big difference," said Ron Howell, co-chair of a neighborhood watch group. "We notice a lot of things are down. There's more people involved, which is great."

People would illegally dump garbage in the alleys behind the homes in his neighborhood on an average of two to three times a month before the program launched, according to Howell, a 30-year North Hills resident.

And he would often notice people parked in cars along the street by the 118 Freeway, waiting to buy or sell drugs.

Now, those people are mostly gone, Howell said. And there's less illegal dumping and less graffiti, although cars are still getting broken into, he said.

"I think it's working out pretty well," Howell said. "Anything that works, I'm for."

Officers also have been recruiting at-risk youths in the area for the Councilman Greig Smith LAPD Devonshire Youth Center in Northridge, which offers after-school programs, to keep them away from gangs.

"It really is an effort to empower the community to step in and now rely so heavily on law enforcement," Feiman said. "So along with the increased enforcement, we always try to include the community and try to give back the neighborhood to them, so to speak."

Violent crime in the area was down 28 percent compared to January of last year, and property crime was down 13 percent, according to LAPD crime analyst Jason White.

Divisionwide, violent crime was down 17 percent compared to December, though property crimes were up 6 percent.

The quality of life is noticeably improving, said Sgt. Ruthann Scott, who grew up in the area.

"They're doing tremendously better," Scott said. "Families, women with kids walking around, seeming to be a little more confident in the area. It makes it a little safer to lead a normal, active life, and not have to worry about being robbed or pickpocketed."