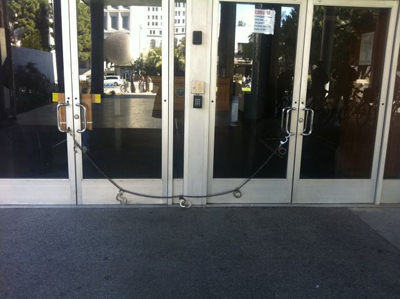 Parker Center, the iconic headquarters of the Los Angeles Police Department for more than five decades, was closed for good Tuesday.

Top police officials, several elected city officials and a few hundred LAPD employees gathered on the lawn beneath the spare, windowless facade of the downtown building for a brief ceremony before LAPD Chief Charlie Beck symbolically padlocked the front doors.

"It is the ghosts and the glory of Parker Center that has made us what we are," Beck said, referring to the mix of scandal and good police work the department embodied while it was housed in the building from 1955 until 2009.

Named in memory of the LAPD's longest-serving and most influential chief, William Parker, the building was featured in numerous television shows and films. For the real-life LAPD, it became a symbol of the department's transformation from a badly corrupt, unprofessional organization to a tightly-run paramilitary operation under Parker. 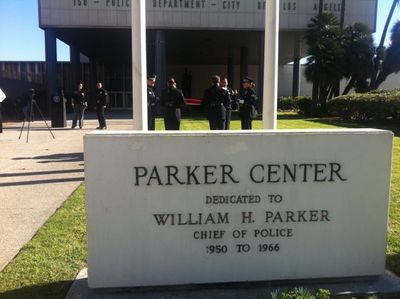 Some of the city's most notorious criminals, including Sirhan Sirhan and Charles Manson, were held in building's jail. And when the city erupted in riots after officers were acquitted in the beating of Rodney King, enraged protesters set fires at its edges.

As it aged the building became run down and outdated, and concerns about its inability to withstand a major earthquake led the city to move the department into its new facility. Members of the fingerprint analysis unit, polygraph specialists and a few others however were forced to stay behind in the mostly abandoned building as the city fell far behind on plans to build new lab facilities for them.

With those labs now complete, city officials must decide whether destroy the building or try to salvage it for some future use.