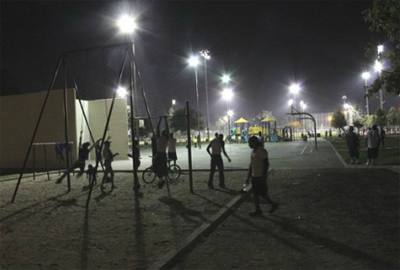 In this Wed. July 6, 2011, residents hang out at the basketball court at Algin Sutton Recreation Center in South Los Angeles. The center is being included in the city's Summer Night Lights program to reduce gang violence for the first time this year. (Thomas Watkins / AP Photo)

It's after 10 p.m. on a recent Wednesday night, yet the park near Watts is bustling with kids. Silhouetted by bright lights, they hop skateboards from concrete stairs and sway perilously high on playground swings.

Hanging out late on dangerous gang turf is generally a bad idea and can even be illegal. But authorities are not only happy to see the nocturnal activity, they are paying millions of dollars to make it happen.

The youngsters are out as part a newly expanded anti-gang initiative that has been credited with drastic crime reductions. The premise is simple: Leave the lights on in parks and give kids something to do then they won't bother with gang life.

"It keeps me out of trouble," said Brett Moody, 19, a resident of the Imperial Courts housing project who got a summertime job through the program. "It lets me help with the kids that grew up here."

So important is the Summer Night Lights program that cash-strapped Los Angeles is expanding it even as it makes deep cuts elsewhere. This year, 32 parks are bathed in light until midnight from Wednesday to Saturday, eight more areas than last year. The program will run until Sept. 3.

Since starting in 2008, homicides have tumbled by more than half and violent crime has dropped by 40 percent. While crime is down across the city for the ninth year straight, the decreases in the program areas surpass that overall rate.

The statistics stand in stark contrast to crime spikes historically seen in the summer months, when kids are out of school and stifling heat pushes people from their homes and onto the streets.

"It's something to do besides staying at home," said Ahsante Smith, 13, who skateboarded at the opening night of the program on July 6. He said he usually would not want to visit the park after dark because "people come here and act crazy."

An incident near one South Los Angeles recreation area last week reinforced the danger that exists around these parks, which are often taken over by gangs as hangouts. Shortly after the lights were turned out at the park, a gang member fired at a rival, leaving his face and arm with bullet grazes, and walked away.

The shooting provided all-too-real drama for actors Jake Gyllenhaal and Michael Pena on a ride-along at the time with local cops to prepare for an upcoming movie.

"This is a vivid affirmation of why this program is needed," said Guillermo Cespedes, city deputy mayor for gang reduction, adding that police have beefed up patrols around that particular park.

Summer Night Lights involves more than just switching on the lights. At each park, free food is served and 10 "at-risk" youth have been hired to staff events that include skateboarding, movie nights, and even occasional basketball games against a team of police officers.

"These kids don't have a lot of opportunity to go out and to play and be outside without worrying about being shot," said Los Angeles police Capt. Phil Tingirides.

In poorer parts of town, the job market can be brutally tough even during good economic times. Add a criminal conviction to the mix and it can be almost impossible to find decent work.

The program looks beyond some past transgressions and has hired 320 youngsters aged 17-20 who can show they have quit gang life. They get a stipend of about $3,500 for the summer.

On a recent night, floodlights illuminate the basketball courts behind the Algin Sutton Recreation Center in South Los Angeles. Signs of gang activity abound, with pairs of old shoes dangling from power lines and graffiti blasted across the center's front windows.

Young kids jumped in a bounce house and inside the recreation center an arts and crafts class was offered. At least 100 people milled around while a DJ played music on an outdoor sound system and a group of men kicked a soccer ball at a brightly lit handball wall, turning it into a makeshift goal.

"Usually, you've got people cruising around," said 19-year-old Chris Castillo. "If you look like you gang bang, they will stop you. If they ask you where you are from, you won't be walking home anymore."

Robert Rubin, who was heading up a team of 11 gang interventionists deployed to the park to diffuse any trouble, was pleased at the turnout. He and others had lobbied for the park to be included in the program for the first time.

"This has been one of the most under-utilized parks ... because of the fear of gang activity," he said. "The park is supposed to be used for recreation, not hanging out."

The police department supports Summer Night Lights, which stresses relationship building rather than tough-on-crime swagger. Officers can technically arrest some who attend the parks if they are documented gang members because city law prevents known gangsters hanging out in certain areas.

But enforcement of such laws is suspended at Summer Night Lights parks, Capt. Raymond Maltez said.

Half of the $6.2 million the program costs is coming from private companies, the remainder from public funds.

"It's giving communities much more hope," said Patrick Escobar, vice president of grants and programs for the LA84 Foundation, a fund left over from the 1984 Los Angeles Olympics which gives $100,000 annually to Summer Night Lights.

Latasha Weber, a mother of six, who lives near Algin Sutton park, said she supported the program, provided youngsters were being constructively supervised.

"If they are not supervised, that could be bad," she said.