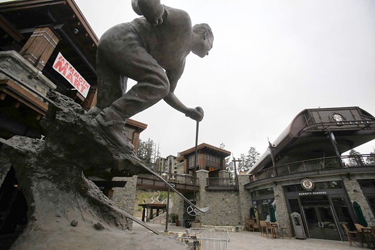 A statue of a skier in Mammoth Lakes. Los Angeles Times

A proposal to lay off nearly half the police force in the High Sierra town of Mammoth Lakes would jeopardize the safety of residents, tourists and officers, the president of the Mammoth Lakes Police Officers Assn. warned.

"Our main concerns include public safety and maintaining backup for our officers," Sgt. Paul Robles, president of the Mammoth Lakes Police Officers Assn., said in an interview. "The town should worry about that too. If people don't feel safe they are not going to come to a place that depends on tourism for survival."

The Mammoth Lakes Town Council proposal calls for eliminating 13 municipal positions, including seven of 17 sworn officers, as part of an effort to pay a settlement reached with a developer on a breach-of-contract judgment.

Facing a judgment far larger than its annual budget, the resort town of 7,500 permanent residents filed for bankruptcy June 2. Mammoth Lakes emerged from bankruptcy court in August after agreeing to make annual payments of about $2 million for 23 years to developer Mammoth Lakes Land Acquisition.

The Town Council is expected to vote Dec. 5 on a proposed restructuring plan that includes the proposed cuts.

The town is already developing strategies to mitigate the loss of sworn officers with volunteers and a police reserve program, Mammoth Assistant Town Manager Marianna Marysheva-Martinez said in a prepared statement.

Robles dismissed those measures as "ludicrous."

"If the cuts are approved," he said, "the department will not be able to handle radio calls in a timely manner or competently solve crimes. Officer safety will become a serious issue. There will no longer be a school resource officer or a narcotics task force."

In a ski town where the population grows to more than 40,000 people on busy holiday weekends, the department may not even be able to provide regular public services, such as helping tourists put snow chains on their vehicles, Robles said.