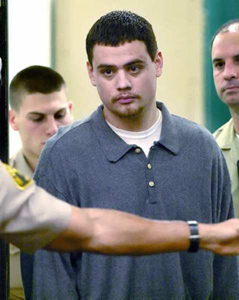 Garcia, 28, was immediately sentenced to life in prison without the possibility of parole.

Pavelka, 26, was killed in an exchange of gunfire during a routine stop outside the Ramada Inn after just 10 months on the force. His partner, Officer Gregory Campbell, was wounded as they approached a parked SUV -- in which Garcia was a passenger -- on suspicion that drug activity was taking place.

"We are pleased the defendant has admitted responsibility for these heinous crimes," Los Angeles County District Atty. Steve Cooley said in a statement today. "We hope this resolution provides some measure of justice for the brutal murder of Officer Matthew Pavelka and the attempted murder of Officer Gregory Campbell."

In 2004, Garcia was indicted on one count each of murder, attempted murder, possession of a controlled substance for transportation and five counts for weapons violations.

Garcia, who was 19 at the time of his arrest, alleged officer misconduct during the arrest.

A trial had been postponed for years by scheduling conflicts and medical issues.

Reached by phone, Garcia's attorney, Seymour Amster, said they also wanted to make sure the death penalty was taken off the table.

"We just had to fully explore these options," Amster said.

Amster also thanked prosecutors and the Pavelka family for agreeing to the plea deal.

Prosecutors announced in 2004 that they intended to seek the death penalty against Garcia. But in exchange for Garcia's plea on Tuesday, they agreed to not pursue the death penalty, Head Deputy William Hodgman, of the district attorney's Target Crimes Division, said in a statement.

In 2005, Garcia was named in a federal indictment alleging he and members of a San Fernando Valley street gang were involved in racketeering, weapons, narcotics and other crimes.

Garcia was already in custody when federal authorities took down members of the gang as part of "Operation Silent Night."

At the time, former Los Angeles Police Chief William Bratton vowed to take down anyone responsible for Pavelka's death.

After "Operation Silent Night," Bratton said authorities had "fulfilled that promise to the Pavelka family and to the communities that we serve."

According county prosecutors, the U.S. Attorney's Office is still prosecuting Garcia and other gang members named in the indictment.

Prior to Pavelka, Burbank police had not lost one of their own in a shooting since 1920.