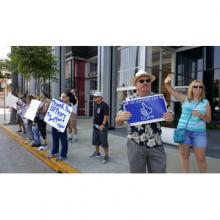 Rosa Padilla is the mother of a narcotics officer and mother-in-law to a son entering the police academy.

So she spent her Saturday morning on a passionate cause: honoring the men and women in uniform whom she calls "our blessings, who protect our lives and our beliefs each and every day."

She joined a dozen other participants who marched from the Los Angeles Police Department's Hollywood station to the CNN building along Sunset Boulevard, urging motorists to "Honk your horn, show your support" for all law enforcement officers.

Padilla had asked citizens to gather for a Law Enforcement Appreciation Day, which comes on the heels of fatal ambushes of police officers in Dallas and Baton Rouge, La. The incidents followed racial tensions over police shootings of black men in Baton Rouge, Falcon Heights, Minn., Los Angeles and elsewhere.

But participants in Saturday's march said that not enough attention is given to those who risk their lives every day to protect the public.

So far this year, 68 police officers have been killed in the U.S., according to Mark Cronin, who serves on the board of directors for the Los Angeles Police Protective League, the union representing 9,800 members.

"One is too many," said the 23-year LAPD veteran. "The majority of the public is very caring, but some of our guys feel very beaten right now."

He cited several reasons - the divisive political climate, including politicians who pander to public fear, and here in L.A., a police commission without members who previously worked as a police officer.

"It's very important to me that our guys are always safe," he said. "We shouldn't be second-guessed by anyone when we're doing our jobs."

Lois Cronin, his wife and a high school history teacher, said simple encouragement can make a big difference for those who risk so much.

"Ultimately, these guys have a heart for service. Everyone gives it their all and everyone wants to get home safely to their families," she said. "The public doesn't always realize that police people are regular people - like you and me. They have feelings. They don't have a different persona from someone coaching the Little League team or grilling at a barbecue in the backyard."

Next to her, a policeman's wife wearing a "Blue Lives Matter" T-shirt said someone harassed her at the supermarket because of the slogan.

But motorists honked their horns in support.

Cory Palka, senior captain of the LAPD'S Hollywood Division, said the community where he's stationed "represents hope. And here we are in the land of dreams with people sharing their dreams."

What makes Hollywood challenging is "most of our crime victims and our crime suspects don't live in Hollywood," Palka said. "But we're out there, meeting and talking to everyone to keep this lively place safe."

Padilla of Westchester said she worries that "the public is intimidated, afraid of showing they support police. The police are not going to take down innocent people. Remember, they don't run from the action - they run toward it."