Walter Moore wrote yesterday that LAPD - and by extension, Mayor Villaraigosa - are understating the city's crime rate by using an inflated population estimate. When I saw the number - 4,220,260 - it looked suspicious so I decided to do some digging.

I pulled population estimates for 2000 through 2007 from both the US Census Bureau and the California Department of Finance, and compared them to the figures LAPD uses in its crime statistics reports. Here's what I found:

Not once between 2000-07 were LAPD's population estimates anywhere near the Census Bureau estimates - not even within 100,000 people. In fact, LAPD's estimate was consistently 3% greater than the Census Bureau's until 2005, when it more than doubled to 7%. Then, the following year, it shot up again, to 9% - nearly 400,000 more LA city residents, according to LAPD, than estimated by the Census Bureau. In other words, more than the combined populations of Burbank, Glendale, and Santa Monica. 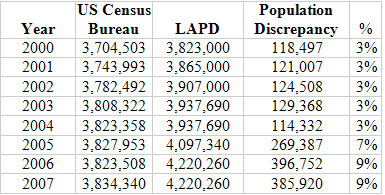 LAPD vs. US Census Bureau

The California Department of Finance's numbers were closer to LAPD's, but still failed to explain the threefold spike between 2004 and 2006. What's more, it appears LAPD actually used the DOF estimate in 2000, before increasing it significantly for subsequent years' reports. Perhaps strangest of all, LAPD's estimates remain unchanged from 2003-04, and again from 2006-08. 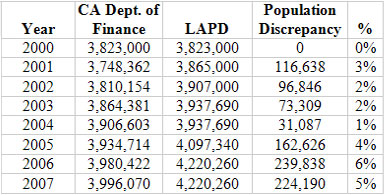 LAPD vs. California Department of Finance

None of the population estimates in LAPD's COMSTAT reports are sourced.

I'm not charging crookery here, but at face value, this is all very odd. Given that these statistics have been published by our local press, and will undoubtedly feature prominently in the mayor's reelection campaign, he and Chief Bratton should disclose the source and/or methodology.