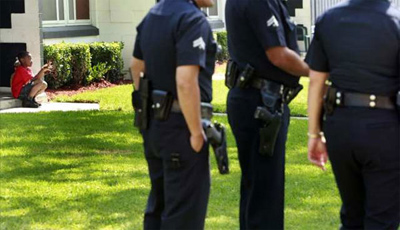 By almost every measure, Los Angeles police are succeeding: Crime is down, public confidence up, and police who were once reviled in many neighborhoods get far more respect. So it's particularly strange that assaults against police officers, rather than falling along with crime, instead have shot up.

In the first half of 2010, the LAPD recorded 68 serious assaults against police; so far this year, that total is 105. That's discouraging because the number had dropped significantly in 2010, and police were hoping that was the beginning of a long-term trend. The uptick in Los Angeles comes against a national backdrop of increasing violence against police. This year opened with a spate of shootings at officers across the nation - 10 in the first week of January alone. Through July 5, 41 officers nationally had been killed by gunfire, compared with 29 through that date in 2010.

Former Police Chief William J. Bratton has seen more policing in more parts of the country than just about anyone, and he's not particularly concerned about the uptick in violence against officers. "Criminals don't like to be arrested," he told me last week. What encourages him is that LAPD officers are handling those confrontations with patience and professionalism. Back in Bratton's days as a beat officer in Boston, a suspect who resisted arrest was expected to arrive at the station at least as badly hurt as the officer. Today, Bratton says, after more than a decade of stricter accountability, the LAPD polices according to the "three Cs": constitutionally, compassionately and consistently.

Paradoxically, one factor in the recent increase may be better policing. Several years back Bratton loosened the rules for when police can respond to crime scenes with lights and sirens. "Instead of being 15 minutes late and everyone's gone, now we get there and the crime's still going on," said LAPD Capt. Phillip C. Tingirides, who runs the department's Southeast Division. That's good for public safety, but it can mean more violent confrontations.

Tingirides' division is in one of the city's most dangerous areas and home to some of its largest housing projects. It is an area where liquor and fast food are available on almost every commercial street corner, while quality supermarkets and sit-down restaurants are notably absent. It is, as Tingirides described it, a place where "having compassion is huge."

And yet, despite its demographics and difficulties and many challenges, Southeast is bucking the alarming trend in violence against police. Felony assaults against police in the division have dropped from 12 in the first half of last year to four this year.

That's worth noting, in part because Southeast is also a place where, historically, relations between police and the community have been difficult. Tingirides' colleagues, Sgt. Randy Goens and Senior Lead Officer Eric M. Young, recall an evening in 2007 when a crowd, angry at a rough arrest in the division, stormed the station and rushed the front desk. Protesters pushed their way over the desk and grabbed officers; it grew so furious that the station dropped the steel barrier that guards the front door.

There are still plenty of tense moments. Summer, for example, brings particular problems. Residents are outdoors more, they're drinking, they get cranky and combative. Police arrive to do their work, and conflict is hard to avoid. "When we're taking someone to jail, they don't always want to go along with the program," Young said.

But the Southeast officers said they can palpably feel the difference between working against a community and working with it. Goens, for instance, remembers an altercation at Imperial Courts a little over a year ago. It was a weekend night, and police arrested a suspect in view of a crowd mingling in the project grounds; the arrest was physical, and the crowd gathered menacingly around the officers until a woman who is widely regarded as a leader in the community - and whom the LAPD has taken pains to respect - arrived and was briefed on the incident. She urged the crowd to disperse. It did.

Perhaps the most vivid example of progress, however, lies in the dramatic change in the Southeast Division's relationship with Nickerson Gardens. In the 1980s, as Tingirides remembered, the LAPD would not send a two-officer car to respond to calls for help from the project; it was too afraid of ambush. Last week, a group of LAPD officers played a basketball game against a team from Nickerson Gardens at the project. Nickerson Gardens won with a shot at the buzzer.

Officers will hear about that for a few weeks. They'll be teased about a rematch, said Goens, but they'll be talking about basketball.

Those are the paybacks for a more conscientious Police Department - safety for officers, order for communities, peace.