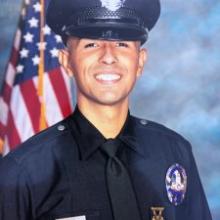 The services were taking place at Cathedral of Our Lady of the Angels in downtown Los Angeles beginning at 9 a.m.

Diaz, 24, was off-duty when he was gunned down by Cristian Adrian Facundo near Avenue 26 and Humboldt Street on July 27, according to the department.

Los Angeles Archbishop Jose Gomez presided over Monday’s services, leading a bilingual mass where several of Diaz’s relatives and loves ones were seen wearing all white as they sat in the front pews of the cathedral.

Three officers in full uniform and three other pallbearers carried Diaz’s casket into the the cathedral as the memorial began.

Just before the fatal shooting weeks earlier, Facundo had been spray-painting gang-related markings on a sidewalk when Diaz and a friend “kinda questioned why” he was doing that and asked him to stop, LAPD Captain William Hayes said last week.

Hayes said Facundo then approached the group and pulled up his shirt to show a handgun concealed in his waistband. He then allegedly walked away and the group tried leaving.

But, according to police, Facundo and Francisco Talamantes, 23, ran up to the side of the truck Diaz and his friends were in just as they started driving away and started shooting — killing Diaz and severely wounding another passenger in the back seat.

One of the clergy members who spoke before mourners Monday said Diaz died trying to fix “something that was not right.”

“He tried to correct it. I guess you can call it — an instinct of an officer off-duty. I call it an instinct of a soul who used his God-given freedom and free will for the good of others and the beauty of his surroundings,” he said.

“Instead of accepting the guidance of a good soul, those individuals chose to use their God-given freedom to kill him and to destroy,” he added.

“This is a reminder to each one of us that this boy from Northeast Los Angeles, this son of immigrants from Mexico … that he stood up and that we should stand up for what is right in this city every single day,” the mayor said.

LAPD officials have said a third suspect, 18-year-old Ashlynn Smith, has been charged with accessory to murder. Authorities said the suspects also fired at two other individuals that same night but no one was wounded in that second incident.