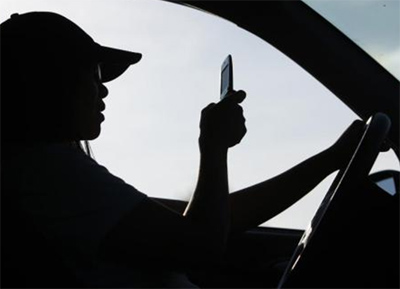 Police nationwide are issuing a growing number of tickets for texting while driving as more states make the practice a primary offense and become aggressive in cracking down.

Governors Highway Safety Association (GHSA) spokesman Jonathan Adkins says 31 of the 34 states with text messaging bans, as well as Washington, D.C., have made texting while driving a primary offense, allowing police to pull drivers over for that specific offense. California and New York are among them, as is Maine, where the law went into effect last month.

Nine states made texting while driving a primary offense in 2010, and four more have done so this year, including Nevada, which will issue warnings until the law is in full-effect Jan. 1, 2012, Adkins said.

"With any highway safety law, primary is the most effective," Adkins said.

Adkins says there isn't a national database on texting citations, but many states and counties keep track. Chris Murphy, director of the California Office of Traffic Safety, said California had 7,924 texting convictions in 2010 - almost tripling the 2,845 citations issued in 2009, the year it made texting and driving a primary offense.

Chris Cochran, assistant director of marketing and public affairs for the California agency, said that increase was probably due to the law being in its second year and more law enforcement agencies becoming aware of and active in enforcement.

He said he wouldn't be surprised if 2011 saw even greater growth, due to statewide enforcement and a public awareness campaign that kicked off in April.

New York made texting and driving a primary offense in July. The Department of Motor Vehicles reports it had issued 4,634 tickets this year through mid-September, exceeding the 3,248 issued in all of 2010.

"When the seat-belt laws first went into effect, very few people actually buckled up. Now seat belt compliance is over 90%," New York DMV spokeswoman Jackie McGinnis said. "With increased education and enforcement, we look forward to the day when compliance with the hand-held device laws will be at the same level as seat belt use."

"We actually put ourselves in close proximity to the cars," Harnden said. "A lot of times [the phone is] down on their lap or down on the steering wheel ... people are so distracted that they don't even realize we are right there."

A study released in July by the National Highway Traffic Safety Administration showed texting while driving decreased in Hartford, Conn., and Syracuse, N.Y., with increased education and enforcement from April 2010 to April 2011.