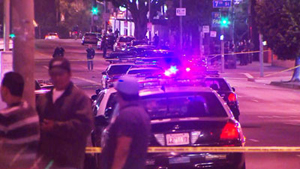 Police continued to search Monday for suspects in the shooting of two undercover LAPD officers in Koreatown.

The people being sought are in addition to two teenage boys who already have been booked in connection with the Saturday night shooting that wounded the officers. The names of the arrested boys have not been released because they are juveniles.

The plainclothes officers were shot after they came upon what appeared to be a gang-related shooting of a woman, authorities said.

The officers were shot in the face with small pellets. One officer was hit in an eye. The other officer was released from the hospital with minor injuries.