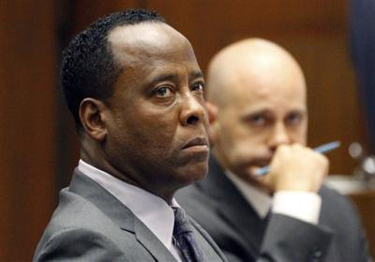 In this Oct. 3, 2011 file photo, Dr. Conrad Murray listens to testimony seated near his attorney Nareg Gourjian, right, during Murray's trial in the death of pop star Michael Jackson in Los Angeles. Gov. Jerry Brown and others who supported the dramatic shift in California's sentencing law that took effect this week have said it will send only those convicted of nonviolent or non serious crimes to county jails instead of state prison, a change designed to save the state money and reduce inmate crowding. Among those who could be affected by the new law if convicted is Murray. Legal experts said he would serve his maximum four year sentence in a Los Angeles County jail instead of state prison. (AP Photo/Mario Anzuoni, Pool, File)

Gov. Jerry Brown and others who supported the dramatic shift in California's sentencing law that took effect this week have said it will send only those convicted of nonviolent or non-serious crimes to county jails instead of state prison, a change designed to save the state money and reduce inmate crowding.

Yet a review by The Associated Press of crimes that qualify for local sentences shows at least two dozen offenses shifting to local control that can be considered serious or violent.

Among them: Involuntary manslaughter, vehicular manslaughter while intoxicated, killing or injuring a police officer while resisting arrest, participating in a lynching, possession of weapons of mass destruction, possessing explosives, threatening a witness or juror, and using arson or explosives to terrorize a health facility or church. Assault, battery, statutory rape and sexual exploitation by doctors or psychotherapists are also covered by the prison realignment law and carry sentences that will be served in a county jail instead of state prison.

"These crimes include a variety of offenses that would strike many civilians as far from trivial," Public Policy Institute of California researcher Dean Misczynski wrote in a recent analysis of the new law.

A list of 500 criminal code sections to be covered by the law was compiled by the California District Attorneys Association and posted late last month to its website. In response to a request by the AP, the state attorney general's office confirmed the association's review was accurate but said defendants with a previous felony conviction or those charged with enhancements would still be sent to state prison.

Among those who could be affected by the new law if convicted is Dr. Conrad Murray, who is on trial for involuntary manslaughter in the death of Michael Jackson. Legal experts said he would serve his maximum four-year sentence in a Los Angeles County jail instead of state prison.

The length of sentences won't necessarily change, but the realignment law does offer significant differences for inmates.

Judges also have the discretion to impose "hybrid" or "split sentences" in which offenders serve part of their sentence in county jail and the rest on what is being called "mandatory supervision," overseen by probation officers.

Offenders convicted of more significant crimes still are likely to get lengthier sentences, even if they are served in jail instead of prison, said Scott Thorpe, chief executive officer of the state district attorneys association. But sentencing more serious offenders to jail rather than state prison will likely force counties that already have crowded jails to release less serious offenders who are serving time for crimes such as auto theft, burglary, grand theft, forgery, counterfeiting and drug crimes.

Los Angeles County District Attorney Steve Cooley is among those complaining that counties will be forced to release lower-level offenders by the thousands before they have served their full terms.

"Many serious criminals sentenced to lengthy state prison sentences will still be required to be housed locally. Such sentenced prisoners will take up beds for longer periods of time and, cumulatively, will substantially decrease available bed space," Cooley wrote in a letter made public last month.

"Realignment casts too wide a net in defining 'low level offenses,'" he added.

Los Angeles Police Chief Charlie Beck said he plans to remove 150 officers from patrol and other assignments to deal with the state's prison realignment plan. He and Mayor Antonio Villaraigosa on Monday warned that the new law threatens to reverse the falling crime rates Los Angeles has seen over the last decade.

Deputy state Attorney General Darren K. Indermill said defendants would still go to state prison, no matter the nature of their conviction, if they have serious or violent criminal records, if they must register as sex offenders, or if they are convicted of certain aggravating circumstances in white collar crimes.

Lawmakers and Brown had to move some serious crime categories to county jurisdiction to get the financial savings needed to help the state's budget, said Thorpe, of the district attorneys' association.

They also needed to include more crimes to reduce crowding in state prisons under a federal court order to improve inmate medical care, recently upheld by the U.S. Supreme Court. The court has given the state two years to remove about 33,000 inmates from its 33 adult prisons.

When he signed the realignment bill in April, Brown said California "will continue to incarcerate offenders who commit serious, violent, or sexual crimes; but counties will supervise, imprison and rehabilitate lower-level offenders."

Last week, Brown said the alternative to the realignment law would be early releases for state inmates to meet the federal deadline.

"The most serious we lock up in prison," he said on the eve of the law taking effect. "The less serious, although quite troublesome, we handle at the local level."

Republican lawmakers who have been critical of the realignment law reacted harshly to the list of more serious crimes that will be handled locally rather than by state prisons.

Assemblyman Jim Nielsen called it "an alarming list of folks who are low-level offenders.... The penal code obviously needs to be changed."

Nielsen, a former California parole board chairman, predicted that lawmakers will move some of the crimes off the list of lower-level offenses only after problems arise from the realignment law.

"I think the time will be right, unfortunately and despicably, after a few more victims," he said. "Then the public will be mad."

"Crimes like killing a person while driving drunk and felony child abuse are not minor crimes," she said in a statement responding to the AP's story.

Many law enforcement officials have defended the new law, saying it is important to look at the underlying facts of a case before passing judgment on its seriousness.

Merced County Sheriff Mark Pazin, president of the California State Sheriffs' Association, said involuntary manslaughter is among the crimes that should be punished at the local level. The death could have occurred in a crime of passion or heat of the moment, he said, as opposed to someone charged in serial killing or gang killings.

"Then you go back to vehicular manslaughter: Was it a crime in which there was an unfortunate incident with a DUI? The person made a one-time mistake?" Pazin said. "Does that mean we incarcerate that person forever?"

Pazin and others also argue that counties will offer better drug, alcohol, counseling and rehabilitation programs.

While involuntary manslaughter is on the list of crimes with sentences to be served in county jails, Murray's attorneys and Los Angeles County district attorney's spokeswoman Sandi Gibbons would not comment on where Michael Jackson's doctor would serve his time if he is convicted. They cited orders from the presiding judge that they not discuss the case.

"Well as I read the statute, pure involuntary manslaughter if it doesn't involve a weapon or direct physical infliction of bodily harm on the victim is non-serious and nonviolent and isn't part of the special excluded list. So if that's what he's convicted of, yes he goes to county jail," wrote Stanford University law professor Robert Weisberg in an email response to the AP.

Murray is charged with giving Jackson a fatal dose of the powerful surgical anesthetic propofol and other sedatives to help the singer sleep. Murray's attorneys say Jackson gave himself the fatal dose after his doctor left the room in June 2009.

Several other experts, including William Portanova, a former state and federal prosecutor in Sacramento, also said Murray would serve his time in county jail if he is found guilty.

"You can accidentally kill somebody by making an unsafe lane change," said Portanova, now a defense attorney. "There's a big difference between that and intentionally trying to hurt somebody."