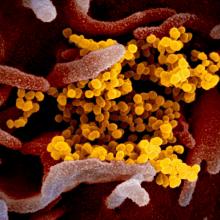 This undated electron microscope image made available by the U.S. National Institutes of Health in February 2020 shows the Novel Coronavirus SARS-CoV-2, yellow, emerging from the surface of cells, pink, cultured in the lab. Also known as 2019-nCoV, the virus causes COVID-19. The sample was isolated from a patient in the U.S. (NIAID-RML via AP)
Eric Licas
LA Daily News

An additional six employees of the Los Angeles Police Department have tested positive for the novel coronavirus this week, bringing the number of cases within the agency up to 15 as of Thursday, March 26.

Two of the latest cases of COVID-19 among LAPD staff were detected between Tuesday and Thursday, said Jessica Kellogg, a spokeswoman for the Los Angeles Emergency Management Department. At least one was a civilian employee, but most were sworn members of the department.

All 15 patients, as well as two others who work for the Los Angeles Fire Department, were placed under quarantine after exhibiting symptoms, Kellogg said. They were all in isolation in their homes and recovering as of Thursday afternoon. Details regarding where they had been stationed were not immediately available.

Authorities announced the first confirmed case of COVID-19 among LAPD staff on Sunday, March 15. That patient was a supervisor based out of the agency’s Pacific Division.

A second senior staff member for the department was diagnosed with the new disease, officials said Thursday, March 19. Three days later, officials confirmed that an officer based out of the Central Community Police Station, 251 East 6th Street, became the third member of the LAPD to contract coronavirus.

There were nine cases within the department as of Monday. Another three were identified the following day, Kellogg said.

A growing number of LAPD employees at all levels in the chain of command have shifted out of their regular duties in order to augment patrols amidst a statewide stay-at-home order and a global pandemic. More time on the streets means a higher possibility of exposure to the novel coronavirus.

“The detectives all the way to the officers that were involved in youth outreach programs are all being utilized to contain this virus,” police Sgt. Keith Mott of the Department’s Community Outreach and Development Division said.