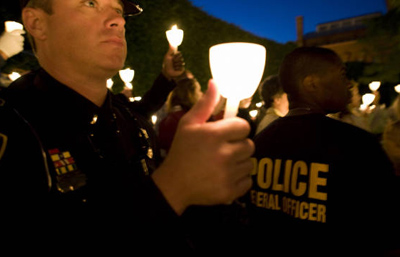 Police officers and relatives hold candles at a ceremony honoring officers killed in the line of duty in 2008.

The number of police officers who have died in the line of duty in 2011 has increased 14 percent nationwide from last year, according to the National Law Enforcement Officers Memorial Fund.

The shooting death of a New York police officer early Monday morning marks the 166th death nationwide in the past 11 months, up from last year's 146, Floyd said.

Veteran police officer Peter Figoski, 47, died after he was shot in the face when he interrupted a robbery in Cypress Hills, Brooklyn, according to Police Commissioner Ray Kelly's official report.

This most recent killing comes just days after the murder of Virginia Tech University police officer Deriek W. Crouse. That death shook a campus still reeling from a 2007 shooting rampage that killed 32 people.

Since last week's shooting at Virginia Tech, three other police officers have been shot and killed, including Figoski, Floyd said.

"These deaths come at a time when we're drastically cutting back on budgets for police departments across the country," Floyd said.

According to the International Association of Chiefs of Police, cited by the Department of Justice in a Community Oriented Policing Services report in October, 85 percent of agencies reported they were forced to reduce budgets over the last year.

The Fraternal Order of Police estimated between 12,000 and 15,000 sworn officer positions were lost because of budget reductions, as cited by the Department of Justice.

A Law Enforcement Management and Administrative Statistics report indicated there were an average 250 officers per 100,000 people nationwide in 2008. In 2011, the DOJ Community Oriented Policing Services division reports a drop in the police to population ratio, to an average of 181 to 100,000.

Groeninger said the increased death toll can be attributed to budget cuts and what he referred to as a criminal's affinity for violence by gun. There is a tendency of previously incarcerated individuals to go desperately rogue when approached by the officials of law, and "shoot their way out of a situation," he said.

"We're seeing more of that in recent years," he said.

Floyd said he believes the numbers are a testament to the times.

"I think that we have a strong anti-government sentiment in our country, similar to the 1970s, the deadliest decade in law enforcement."

The decade that witnessed the end of the Vietnam War, multiple energy crises, a weakening economy and the impeachment of a president also saw the loss of 2,286 law enforcement officers. That is an average of almost 229 officer fatalities per year.

"In the '70s we saw a lot of protests and disrespect for law enforcement officials, and we're seeing the same thing today," he said.

The deadliest day in law enforcement history remains September 11, 2001, when 72 officers died while responding to the terrorist attacks on the United States.