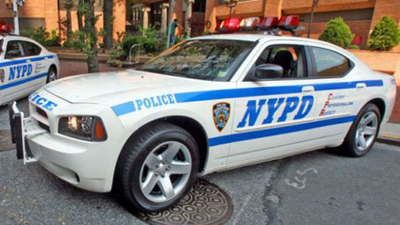 The NYPD says it is testing a new device that would allow officers to detect if citizens are carrying a weapon without having to pat them down.

Police Commissioner Raymond Kelly said Wednesday the device, which resembles body scanners used at airports, reads body energy to find out whether someone is concealing a weapon.

The Wall Street Journal reports the device, known as a "T-Ray Machine" reads terahertz radiation, which is natural energy emitted by humans and inanimate objects.The radiation can penetrate many objects, including clothing.

"If something is obstructing the flow of that radiation, for example a weapon, the device will highlight that object," Kelly said in a speech at the Waldorf-Astoria Hotel.

Kelly showed an image in which the T-Ray scanner highlighted the body of an officer in street clothes, with the outline of gun clearly visible.

Critics say the machine could be an invasion of privacy, and it risks an ordinary object on a citizen being misread by police as a weapon.

"Any technology that allows police to peer into a person's body or possessions raises a lot of questions...," Donna Lieberman, told the Wall Street Journal. "But to the extent that this technology reduces the abuse of stop-and-frisk that harms hundreds of thousands of New Yorkers every year, we're intrigued by the possibilities."

A trial in March is set to decide the fate of a lawsuit challenging the city's stop-and-frisk practices, which have drawn criticism that officers are disproportionately stopping minorities.

Kelly says the tests are preliminary, and the device would not be on the streets any time soon. The NYPD is also working to make the devices portable.

The department started working on developing the device last year with a security-and-surveillance systems manufacturer based in Britain, along with the London Metropolitan Police, and received the machine last week.

New York state had strict laws even before legislators passed the nation's toughest last week, and city regulations augment them. For example, in New York City, gun permits must be renewed every three years; there were no restrictions in other parts of the state until the new action.

Obtaining a permit to carry a pistol or a revolver is incredibly difficult, and carrying a rifle or shotgun in the city is illegal. Out-of-state permits to carry a gun aren't recognized in the city.