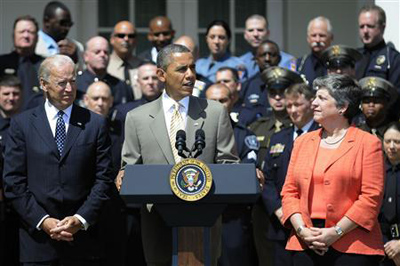 President Barack Obama and Vice President Joe Biden honored 34 police officers at the White House on Saturday for "extraordinary acts of bravery," including two cops from Los Angeles who halted a shooting and one from Chicago who intervened during an armed robbery.

In their first public appearance together since the vice president was seen to preempt Obama's announcement of support for gay marriage, the two kept to their scripts in the sunny Rose Garden of the White House.

Obama said the 34 winners of the National Association of Police Organizations' "TOP COP" awards were "representative of the sacrifices and that quiet courage that exists among law enforcement officers all across the country."

"I hope that we also pledge to learn something from the example that they set. Because while most of us will never be asked to run straight into a hail of bullets, or chase down an armed suspect on foot, we also have responsibilities to meet," the Democrat running for re-election in November said.

Among those honored at the White House event were Sergeant Don Jerome from Chicago, who overcame two assailants who had bound and gagged six people - including three children - when he responded to an armed robbery in progress at a store.

Detective Craig Marquez and Officer Kevin Cotter Sr. from Los Angeles were honored for having responded while off duty to a gunman who began shooting at passersby at the intersection of Hollywood and Vine, killing one person.

The perpetrator refused the plainclothes-clad officers' calls to drop his weapon and fired at them instead before they shot him, the White House said in a statement about the winners.

The number of police officers killed in the line of duty in the United States rose 13 percent to 173 last year, according to the National Law Enforcement Officers Memorial Fund. Gunfire was the number one cause, at 68 deaths.

Budget strains at the state level have also caused a rise in law enforcement layoffs across the country.

After the police ceremony, Obama and Biden went golfing together.