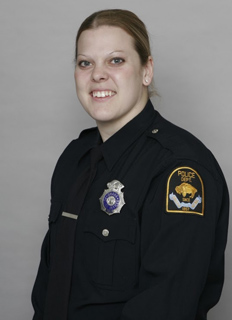 An Omaha police officer was killed during a shootout with a suspect Wednesday, a day before her three-month-old baby was to be released from the hospital, authorities said.

The officer, Kerrie Orozco, 29, had given birth to a daughter, Olivia Ruth, in February, but the baby was premature and remained in the hospital, according to police. The baby, who turned three months old on Sunday, was expected to leave the hospital on Thursday, the same day Orozco's maternity leave was set to begin.

"This is a somber day for the city of Omaha," Todd Schmaderer, the Omaha police chief, said at a news conference Wednesday.

On Wednesday afternoon, Orozco and other officers were seeking a suspect in a different shooting when that person opened fire at the officers. Police said officers with a fugitive task force were serving an arrest warrant when the shots were fired. This suspect was later identified by police as Marcus D. Wheeler, 26, who authorities described as a gang member.

A shootout between the officers and Wheeler followed, and Orozco and Wheeler were both shot. They were both taken to an area hospital in what authorities described as "extremely critical condition," and both were pronounced dead at the hospital. Authorities said they also found a semi-automatic handgun with a high capacity magazine in the area of the shooting.

Orozco had been with the Omaha Police Department for more than seven years, officials said. They said she was active as a baseball coach at the Boys and Girls Club of North Omaha and volunteered with the Special Olympics. She was the first Omaha officer killed in the line of duty since 2003, according to the department.

"She's a tremendous officer and an even better person," Schmaderer said Wednesday. "She was a friend, popular officer, top-notch person, and I just can't imagine that this has even happened."

Orozco is believed to be the 12th police officer and first female officer shot and killed by a suspect so far this year, according to the Officer Down Memorial Page, which tracks law enforcement deaths.