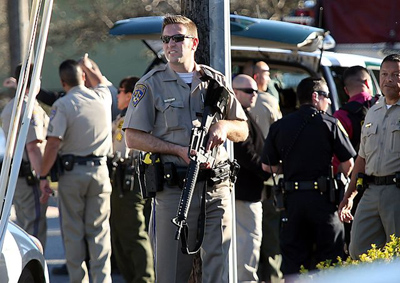 One of the two Santa Cruz police officers slain in a shootout was raised in the Los Angeles area, authorities said Tuesday night.

Elizabeth Butler hailed from Torrance and was a 10-year Santa Cruz Police Department veteran, police said. She was killed with 28-year veteran Loren "Butch" Baker on Tuesday afternoon, when they were conducting a follow-up criminal investigation at a home, law enforcement authorities said.

The suspected shooter, Jeremy Peter Goulet, 35, was shot dead about 30 minutes later in a second gun battle with officers, according to police.

Butler and Baker "encountered Goulet as they did a search of the area. He engaged them in gunfire and was subsequently killed," Santa Cruz County Sheriff Phil Wowak told reporters Tuesday night.

The loss of the two officers followed a recent series of violent incidents in the city and was especially devastating for the small Police Department, which has about 94 sworn officers.

"This is a horrific day. We lost two exceptionally fine officers," a visibly shaken Police Chief Kevin Vogel told reporters. "We need to figure out a way to bring our department together and get through this."

Baker is survived by his wife, two daughters and a son who is a community service worker at the Police Department. Butler leaves behind a partner and two young sons, Vogel said.

"This is the darkest day in the history of the Santa Cruz Police Department," Vogel told reporters Tuesday night.

Analicia Cube, who founded the community group Take Back Santa Cruz in late 2009, called the deaths "just devastating for our community."

The city, about 60 miles south of San Francisco, is best known for its famed surf spots, seaside amusement park and diverse community that includes a University of California campus.

But in recent weeks, a UC Santa Cruz student was shot in the head, another student was reportedly raped and a home-invasion robbery left residents on edge.

"Santa Cruz has always been a different, eclectic kind of town," Cube told The Times, breaking down in tears as she talked about the killings. "Now it's just gotten ugly though."

The 39-year-old business owner and mother of two had just walked into a City Council meeting Tuesday afternoon when Chief Vogel ran past her and sped off in his cruiser. Then her phone rang. A group member had heard it on the scanner: two officers down.

An hour later, as rumors circulated through the chambers, Mayor Hilary Bryant declared a five-minute recess. When council members emerged from a closed session, some were crying.

As the incident unfolded, Santa Cruz police issued an alert for a Jeremy Peter Goulet, 35, but did not explain his potential role.

News accounts from the Oregonian newspaper in Portland state that a Jeremy Peter Goulet was sentenced to three years' probation and sex-offender treatment after a conviction for peeping at a 22-year-old woman as she showered in her Northwest Portland condo.

The Oregonian also reported that jurors also convicted Goulet of carrying a gun without a concealed weapons permit.

The deadly shootings Tuesday followed a commitment by the Santa Cruz City Council to increase funding for the Police Department, which is running about nine officers short.

The Santa Cruz County Sheriff's Office had taken over patrol duties in the city Tuesday night and was leading the investigation into the shootings.

"My primary concern at this point," Vogel said at a news conference, "is for the safety and well-being of my officers as well as the families of the deceased officers."

The Facebook group page for Take Back Santa Cruz, which is closed to outsiders, was filled with posts Tuesday night expressing anguish and anger, according to Cube.

"You're seeing people grieving and in shock," she said. "There's people crying, there's people mad. People are starting to talk about carrying guns around."