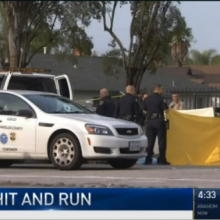 An online fundraising effort was started Wednesday for a motorcycle officer who was critically injured in a crash while responding to a hit-and-run collision that left a pedestrian dead in Pomona.

Officer Trevor Stevenson, a nine-year veteran of the Pomona police force, was northbound on Garey Avenue approaching Garfield Avenue when he collided with a Ford Explorer at 6:37 a.m. Tuesday.

The driver of the Explorer was traveling south on Garey Avenue, approaching Garfield Avenue, and began to make a left turn at the intersection, directly in the path of the officer, police said.

The impact of the crash caused the 32-year-old officer to be ejected from his motorcycle. He was airlifted to County-USC Medical Center with major head trauma.

The driver of the Explorer, a 22-year-old Pomona resident, remained at the scene, then was taken to the Pomona Police Department for questioning, police said.

The fatal crash Stevenson was responding to occurred about 6:20 a.m. Tuesday in the 2200 block of North Garey Avenue, according to the California Highway Patrol.

The pedestrian, identified by the county coroner's office as 60-year-old Charles Washington Jr., stepped off the west sidewalk of Garey and into the path of a southbound 2012 Toyota Corolla, authorities said.

Washington died at the scene. The CHP said he was a transient in the Pomona area.

The driver, a 21-year-old Pomona resident whose name was withheld, did not stop at the scene but returned more than 2 1/2 hours later to speak with investigators and identified himself as the driver involved in the crash, police said.

Pending further investigation, the man has yet to be charged. Alcohol and drugs are not suspected to have been factors in the crash, police said.

A GoFundMe account set up for the injured officer and his family had raised just over $14,000 of a $50,000 goal by Wednesday afternoon. An appeal on the GoFundMe page dedicated to Stevenson said he was in intensive care.

"Trevor has suffered severe head trauma and has a long road to recovery ahead of him," the message read.

If you would like to donate to a GoFundMe account set up to help Stevenson, you may do so here. Note that GoFundMe deducts 7.9 percent of all funds raised in the form of platform and payment processing charges.