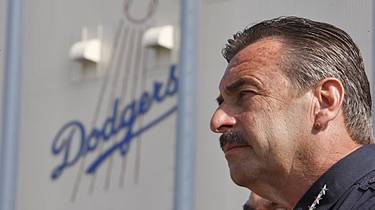 Los Angeles Police Chief Charlie Beck speaks at a news conference at Dodger Stadium to discuss how a tip led police to an early-morning raid to net a suspect in the Dodger Stadium beating. (Allen J. Schaben / Los Angeles Times / May 22, 2011)

After hundreds of dead-end leads and bogus tips from reward seekers, it was a routine meeting between an ex-con and his parole agent that may have cracked open the case of Bryan Stow's beating.

Shortly before 7 on Sunday morning, a SWAT team from the Los Angeles Police Department crept into the courtyard of a dreary, run-down apartment building on Mariposa Avenue in East Hollywood. With weapons drawn, the officers made their way toward apartment 25 - the rear unit on the second floor.

Snapping the quiet of the morning, they announced themselves with a loudspeaker and ordered the people inside the apartment to come out with their arms raised. Among those who emerged was Giovanni Ramirez, a stocky 31-year-old with a head shaved bald.

Ramirez was taken into custody without incident and arrested on suspicion that he was one of two men who blindsided Stow, a San Francisco Giants fan, in the parking lot of Dodger Stadium on March 31 following the season opener between the rival teams. Stow, 42, suffered brain damage in the attack and remains hospitalized.

Ramirez was booked on a charge of assault with a deadly weapon and is being held on $1 million bail. Because he is accused of kicking Stow while he was unconscious on the ground, police consider Ramirez's foot a deadly weapon.

Police were searching for a second attacker as well as the woman who witnesses said drove the men from the stadium. Police said it appeared there was a young boy in the car.

LAPD Chief Charlie Beck called the arrest "a huge step" in the investigation into the beating that rocked the beleaguered Dodgers organization, Major League Baseball as a whole, and many Angelenos who have grown fed up with the sometimes violent segment of the Dodgers fan base that police say is dominated by gang members.

Recounting the phone call he received shortly after Ramirez was in custody, Beck said they were "the words I've been waiting for for seven weeks."

Ramirez, who police said is a documented member of the Varrio Nuevo Estrada street gang, has at least three prior felony convictions. According to police sources, he was convicted of attempted robbery in 1998, robbery in 1999, and firing a weapon in a public place in 2005.

With the attack garnering intense national scrutiny, Los Angeles police officials put 20 detectives on the case - an extraordinary amount of resources. Together, they worked over 6,000 hours on the case and chased nearly 650 tips, Beck said. Police detained several people for questioning, only to determine they weren't involved. The $200,000 reward motivated many people. At least one man showed up at a police station and tried to confess to the crime, asking officers if his family would receive the money if he turned himself in, according to a police official.

Ultimately, the break in the case came from Ramirez's parole agent, said multiple police sources who requested their names not be used because of the ongoing investigation. In announcing the arrest, Beck and Mayor Antonio Villaraigosa referred to a law enforcement figure who offered important information but did not specify his or her position.

According to a source with knowledge of the investigation, the parole agent met with Ramirez for a mandatory check-in meeting shortly after the attack. By then, the LAPD had released sketches of the two assailants, and the agent noticed that Ramirez bore a resemblance to one of the men.

It is unclear whether the agent voiced his suspicions to LAPD detectives right away. But it wasn't until last week that police became focused on Ramirez. After police questioned a different parolee and determined he was not involved, Ramirez's agent, either speaking up for the first time or reiterating his beliefs, expressed his suspicions about Ramirez, the source said.

Ramirez was summoned back to the office for another meeting last week. When he arrived, the agent noticed he had recently added several tattoos, which covered a part of his neck, the source said. Authorities reasoned that Ramirez was trying to cover up an older tattoo in case a witness had seen the tattoo and described it to police.

Circumstantial suspicions turned into something much more solid when, after the meeting, witnesses to the beating picked Ramirez from a selection of photographs shown to them by detectives, the source said.

While detectives continued to work on the case against Ramirez and sought a search warrant for the Mariposa Avenue apartment, a surveillance team tailed Ramirez around the clock from Friday until Sunday morning, when he was taken into custody, police sources said.

There are indications that Ramirez tried to use the Mariposa apartment to keep a low profile after the beating. The building manager said Ramirez wasn't a longtime resident and had been seen coming and going only in the last few months. The manager said a woman, her husband, their two adult children, and the woman's brother lived in the two-bedroom unit. It was not immediately known what relationship Ramirez has to the family.

Along with the apartment on Mariposa Avenue, police officials said they also served a warrant at a second apartment nearby on Clinton Street. Ramirez had given parole agents that address as his residence, the source said.

Stow, a father of two, was walking through the Dodger Stadium parking lot with two friends after the Dodgers' opening-day victory over San Francisco when he was attacked. Stow, who lives in Santa Cruz and worked as a paramedic in Santa Clara, was wearing Giants apparel, police said, and two young men began taunting him. One of the assailants blindsided Stow with blows to the back and head, police said.

The two assailants repeatedly kicked and punched Stow while he was on the ground. Stow's friends attempted to help and were also punched and kicked before the attackers fled. Stow remains in critical condition at San Francisco General Hospital, where he was moved last week from County-USC Medical Center in Los Angeles.

Doctors in San Francisco told reporters Stow had opened his eyes but that his long-term recovery was far from certain.

The incident has brought scrutiny and negative media attention to the Dodgers, who are also in the midst of an ownership battle. Owner Frank McCourt is struggling to meet payroll, prompting Major League Baseball to seize all business and day-to-day operations of the team. Several LAPD officers who worked off-duty at Dodgers games as security personnel criticized a decision a few years ago by Dodgers executives to stop the use of uniformed officers as part of the security team. The change, they said, added to the sense of rowdiness in some parts of the stadium.