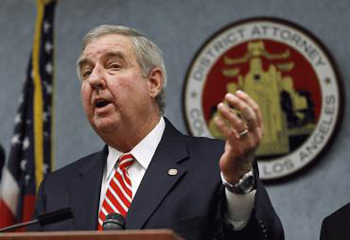 Cooley, however, is a Republican who adamantly opposes the Democratic governor's plan and is training his staffers to do everything they can to work around it - including pushing for the most serious charges to ensure that as many offenders as possible are sentenced to state prison. In a recent interview, Cooley said he is trying to mitigate the "public safety nightmare" that realignment will bring - particularly in a county like Los Angeles, where the jails are overcrowded and the sheriff regularly releases offenders early.

"It is going to lead to an increase in crime, which is unfortunate, because Los Angeles is at a 60-year low," he said. "There is no place for them to serve their sentences."

Cooley and his senior staff said the office may take this training to other counties as well.

Brown's realignment plan, which took effect Oct. 1, changes the way California locks up criminals: Those convicted of nonviolent felonies - such as drug possession and auto theft - serve time in county jail instead of state prison, and will be supervised by county probation departments rather than state parole officers. The program is a response to a U.S. Supreme Court order to reduce the state's prison population by 33,000 inmates by 2013.

The plan is supposed to give local officials, including prosecutors, a greater stake in the outcome of criminal cases in their counties. For prosecutors, that could mean more incentive to pursue probation and other alternatives to incarceration in low-level cases, because the cost of caring for that inmate now falls to the county, rather that state.

But even in liberal cities such as San Francisco, some defense attorneys say they are not seeing changes in the way prosecutors handle low-level cases. San Francisco District Attorney George Gascón supports realignment but argues that some offenders are not good candidates for staying in local jails or serving probation because of past crimes.

Though most of the attention surrounding realignment has focused on how sheriffs' departments, which run jails, and probation agencies, which will be supervising far more offenders, will handle that workload, experts say the way prosecutors react to the change in law could have a huge impact on the program's ability to reduce the state prison population and curb the state's 67 percent recidivism rate.

UC Berkeley criminologist Barry Krisberg noted that offenders convicted in Southern California counties make up the majority of the state prison population, and leaders there tend to be the most skeptical of the realignment plan. If prosecutors in those counties do not change the way they approach and charge cases, he said, the state prison population will continue to rise.

"The heart of the matter is, 'Is there any commitment to use realignment as a way to advance rehabilitation?' Clearly some places are doing that - Santa Clara and Alameda, and San Francisco will make a good effort," he said. "But the larger question is, once you get to the jurisdictions that are dubious about realignment, that have not bought into rehabilitation as the main goal of the justice system, are we just going to see people gaming the system?"

Cooley said his office is teaching its lawyers to "scour" criminal records to make sure they note any prior offenses when they file new charges, and to make sure that new charges include offenses categorized as serious, violent or sexual when possible.

"We are trying to create awareness among law enforcement," he said. "They don't all realize how devastating and disastrous this will be."

It's unclear how much impact these charging decisions will have on convictions, and ultimately, the prison population. After all, it doesn't matter what prosecutors charge a person with if they don't have the evidence to win a conviction, said California District Attorneys Association Chief Executive Officer Scott Thorpe.

"It goes back to an individual district attorney's philosophy (and) charging decisions," he said. "There are certain things that obviously disqualify you from realignment, but if you look at a case and say, 'Here are our charging choices,' there is discretion and clearly counties will apply it differently. But discretion is only as broad as the evidence."

Some prosecutors have publicly embraced the goals of realignment, including Gascón. He is sponsoring legislation to create a San Francisco sentencing commission, is in the process of hiring a sentencing analyst to work with prosecutors, and said he has been "talking to staff for months now about how we can do everything we can to actually make this work, and to do it in a way that that creates better outcomes for the community."

"My philosophy is that we want to be creative, we want to work within the system and we want to make it work - but obviously, we are always looking out for public safety," Gascón said. "But there are some people that are not going to qualify for realignment, because they have a history of violence or sex crimes."

One of those people, he said, is Jason Collins, a 30-year-old man who will be sentenced Monday for selling 0.19 grams of crack to a police officer. He is facing up to 11 years in state prison.

Qiana Washington, Collins' public defender, said he has a long history of drug abuse but has never been offered treatment. Washington said Collins was offered a plea deal of three years in state prison in the most recent case, but elected to go to trial because he denied selling the drugs and claimed he was beaten by the arresting officers.

"To me, it seems like prosecutors are going for more state prison - I have another case where the offer before realignment took effect was one year in county jail, and now, after realignment, they want three years in state prison. It's not like the case has changed in any way," she said. "It doesn't seem to be in line with what the citizens of the state want to happen (to drug offenders), and it doesn't seem like it will do a lot of good."

But Gascón spokeswoman Stephanie Lee said Collins was convicted of robbing an 83-year-old man in 2007 - a violent offense that automatically disqualifies him from a county-jail sentence. Washington argued that prosecutors could have moved to strike the prior offense from his record. The district attorney's office disagrees.

"Mr. Collins had the chance to accept responsibility and plead guilty and he chose not to and went to trial," Lee said. "He attacked an 83-year-old man ... that is not a nonviolent offense."

Gascon said that his office is "looking at one case at a time," to determine what is best for both an offender and the community.

"We really are trying to look very globally at an offender as opposed to just their offense," he said. "Safety is always the overarching concern."