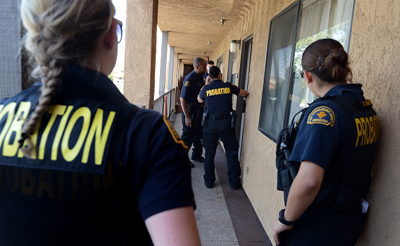 San Bernardino County Probation officers check on a probationer at a motel during a probation and Prison Realignment compliance sweep Thursday, May 23, 2013, in Ontario. (Jennifer Cappuccio Maher/Staff Photographer)

As counties work to put Gov. Jerry Brown's prison realignment plan into place, new concerns are being raised over the safety of probation officers who have to supervise inmates released under the AB 109 legislation.

The union that represents the probation officers in Los Angeles County sent a letter to Chief Probation Officer Jerry Powers last week demanding that he halt a controversial training procedure for deputies hired specifically to do home visits with AB 109 inmates.

Under the new procedures, officers will train in the field for 30 days, doing announced, pre-scheduled home visits with AB 109 probationers under the watch of one of just 80 armed Special Enforcement Officers in the department. These probationers include those convicted of domestic violence, drug violations and registered sex offenders.

After the initial 30-day supervision, newly trained officers will then continue to do home visits without an armed presence.

"It's making everybody extremely uncomfortable," said Sue Cline, second vice-president of AFSCME Local 685, the union that represents LA County's probation officers. "Sure, some probation officers have good relationships with the people they're supervising, but not everyone. It's a huge public safety issue."

The union has pointed to the July shooting in which a probation officer was shot during the course of a home call visit and an accompanying LAPD officer was critically wounded.

In that case, the officer was backed up by armed law enforcement, which the union says indicates the dangers of the job and the even greater danger for solo, unarmed officers.

"This approach is totally against textbook procedure and puts the public and the officers at significant risk," said Ralph Miller, president of the union, in a statement. "Bullets don't have names on them and this is dangerous work."

At issue is not just the lack of arms, but what the union says is inadequate training time.

The union may soon file a legal injunction to keep officers from making home visits for AB 109 probationers, but in the meantime, the training has begun for the 217 deputies hired specifically for overseeing this population.

For its part, the department said it sees the training program and method of inspection as a culmination of more than two years of ramping up for the additional workload placed on it by the release of additional prisoners. 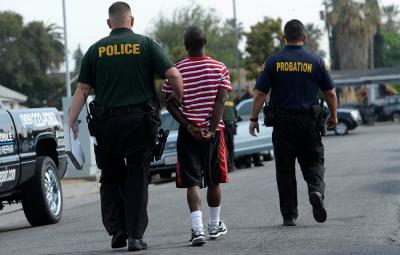 An unidentified man is arrested because of a probation violation along the 1200 block of N. Genevieve Street in San Bernardino April 4, 2013. (Gabriel Luis Acosta/Staff photographer)

"The infrastructure to support these kinds of visits wasn't there when we first started hiring additional officers back when we first knew we'd be adding this case load," said assistant chief Margarita Dalpez, who is overseeing the division. "Now the county is giving us more than $80 million to supervise this population this year, and we've put that infrastructure in place."

Officers who are part of the AB 109 program were hired with the understanding that they would be performing these types of visits, according to Dalpez. She chalks up the union's displeasure to a misunderstanding.

"I think there's some confusion about compliance checks and home visits," she said. "We are asking them to go out and do the home visits and take the opportunity to assess if the person is an appropriate situation."

But the more stringent compliance checks -- in which officers look for probation violations including pornography in the hands of sex offenders or a domestic violence offender living with the person he or she was convicted of abusing -- are conducted with an armed Special Enforcement Officer or in conjunction with LAPD officers or Sheriff's deputies, Dalpez noted.

For now, she said, the program is unlikely to change. The department is looking to hire an additional 253 officers specifically for AB 109 and high-risk offenders and hopes to lower the caseload for each of the officers in the division, which means many will be able to spend more time in the field doing home visits.

The Probation Commission, which oversees and advises the department, says it's still wading through advice on new training procedures as well as protocol for supervising AB 109 probationers.

"The union hasn't actually brought this to the commission," said Dan Meredith, president of the commission. "We're looking at training across the board. We are going to look at firearms standards for officers in August."

And while the commission merely advises the department, Dalpez said training for arming procedures is also something it is looking at internally.

Currently, there are just 40 armed Special Enforcement Officers aiding in the AB 109 division, and roughly 100 in the department as a whole. The department supervises nearly 10,000 mid- and high-risk probationers.

Instead, the department works with other law enforcement to provide backup in dangerous situations.

"Officers are hired to be part social worker and part enforcement," she said. "They have to blend that, but we're looking at firearms training and we're looking to keep them safe. That is in everyone's best interest."