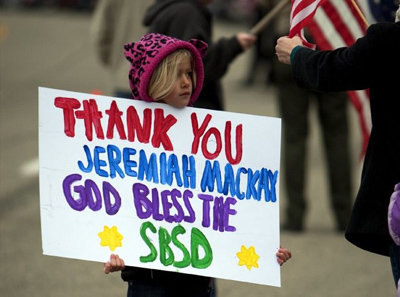 Allison Seratt, 5, holds a sign along the funeral route for San Bernardino County Sheriff's Deputy Jeremiah MacKay, who was killed in a gunfight with Christopher Dorner. Seratt's father is a sheriff at the Yucaipa station where MacKay also worked. (Gina Ferazzi / Los Angeles Times / February 21, 2013)

The day before his death, San Bernardino County Sheriff's Deputy Jeremiah MacKay agreed to a request from his wife, Lynette: He stayed home from work.

He spent the day enjoying the company of his stepdaughter, 6-year-old Kaitlyn, and his 4-month-old son, Cayden.

For days before that respite, MacKay had been patrolling in the mountains where he had grown up, searching for Christopher Dorner, a former police officer suspected of a violent rampage that left three others dead.

MacKay had volunteered for the task, said San Bernardino County Sheriff John McMahon during MacKay's funeral Thursday at San Manuel Amphitheater in San Bernardino. MacKay, he said, was determined to find Dorner and approached the manhunt with "courage, tenacity and resolve."

On Feb. 12, MacKay, 35, wound up outside an isolated mountain cabin where Dorner had barricaded himself. The 14-year veteran of the department was shot and killed in a raging gunfight.

The air was cold and the nearby mountains shrouded in fog before MacKay's funeral began. The sound of bagpipes cut the air, in honor of the fellow piper and member of his department's honor guard.

Mike Riley and a group of drummers and bagpipers drove 18 hours from Boise, Idaho, to play for the service.

"Since Deputy MacKay was a piper, there was a call for all pipes and drums to respond," said Riley, a police officer and drummer wearing a blue plaid kilt. "We're here to temper the grief with honor."

MacKay was remembered as a "cop's cop" with an infectious sense of humor. Colleagues said he won the office ugly Christmas sweater contest and carried a pink Hello Kitty lunch bag. He was said to have the distinctive "laugh of someone who truly enjoyed life."

Three times, speakers referred to the Bible verse John 15:13: "Greater love has no man than this, that a man lay down his life for his friends." McMahon said MacKay "truly died so that others did not have to."

McMahon said MacKay was at a "tremendous disadvantage" during the gunfight but that he "remained because it was his duty ... to place his life at risk to stop an evil man."

Colleagues and friends who were among thousands in the amphitheater said MacKay spoke of wanting to catch Dorner, who died from what authorities believe was a self-inflicted gunshot wound as the cabin went up in flames.

Dorner also is believed to have killed three other people, including Riverside Police Officer Michael Crain, who was buried last week. On Feb. 3, Monica Quan, the daughter of a retired LAPD captain, and her fiance, Keith Lawrence, were found shot to death in what police believe were the first of Dorner's crimes.

MacKay graduated from sheriff's trainee to deputy sheriff on his 21st birthday. He later was promoted to detective and worked most recently in the department's Yucaipa station.

He was known to give bear hugs and to get on his knees to talk to children so he could speak to them eye-to-eye. He was said to have recently taught his stepdaughter how to ride a bike and how to tie her shoes.

His father, Alan, said it was clear since childhood that MacKay was an "adrenaline junkie."

MacKay was 4 years old when his father and a buddy decided to take a backpacking trip to the peak of San Gorgonio Mountain, the highest peak in Southern California. MacKay persuaded them to let him join, though they were sure he would not be able to handle the climb.

He reached the top, Alan said. The only time he was carried was when they went through snow - MacKay was wearing only tennis shoes.

Alan MacKay described his son as a protector who "wanted to intervene when somebody was hurting somebody else."

"I think the reason Jeremiah was taken home ... was that heaven needed a training officer," he said.

Photographs displayed in a video tribute showed MacKay smiling with his son asleep on his chest; sharing pints of beer with friends; laughing with his wife; and playing his bagpipes, with a red face and full cheeks.

As the final prayer was spoken, MacKay's infant son cried.