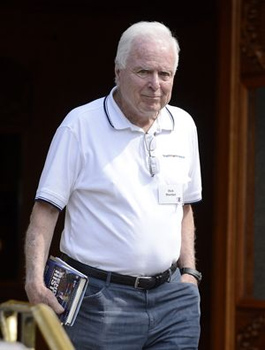 Multimillionaire businessman and former Los Angeles mayor Richard Riordan has accepted a police union's challenge to put his mouth where his money is.

Riordan agreed Wednesday to a series of three debates on the merits of a pension revamp initiative that he is trying to get on next year's city election ballot. The measure would create a 401(k)-style retirement plan for newly hired workers instead of the current guaranteed pensions.

"Dick Riordan looks forward to the opportunity to share his views with the public about the dangerous path the city is going down when it fails to deal responsibly with its pension costs,'' his spokesman John Schwada said in a statement.

Tyler Izen, president of the Los Angeles Police Protective League, on Tuesday challenged Riordan to three public debates before Dec. 7. That's the deadline Riordan, who is bankrolling the campaign, has set to collect roughly 265,000 signatures to qualify his measure for the May ballot.

Izen said Riordan could choose the dates and times. Schwada said the former mayor would provide details "in the very near future."

Union leaders want Riordan to back up his claims that unless changes are made, ever-increasing payments to the city's three pension systems could cripple the city's ability to provide services.

"Riordan has chosen to hide behind carefully orchestrated radio talk-show appearances where no challenging or insightful questions are asked, appearances before groups where he knows his ideas won't be challenged, and well-crafted media releases that lack any pretense of substance," the police union leader said.

Rising city pension costs have become a hot-button issue in next year's mayoral race. Two of the candidates, City Councilman Eric Garcetti and Controller Wendy Greuel, are backed by influential labor groups and have expressed concerns about Riordan's measure.

A third, Councilwoman Jan Perry, has sought to define herself as the fiscally conservative alternative, in part by setting out her own plan to trim pension costs. Kevin James, a lawyer and former radio host, said he will support Riordan's measure if it qualifies for the May ballot.

In March 2011, city voters lowered the benefits provided to new hires in the police and fire departments. And last month, the council passed several changes to the retirement plan for most civilian workers, including raising the retirement age for new employees and forcing them to contribute more toward pensions. But Riordan says those changes fall short of what's needed to pull the city back from the brink of insolvency. Next year's general fund budget faces a $216-million shortfall.

"People are fed up with waiting for their government to take action,'' Riordan told the John & Ken Show on KFI radio last month in announcing his proposed measure.

Labor groups are pushing back hard because Riordan's initiative, if it makes it on the ballot, could prove popular at the ballot box. Voters in San Diego and San Jose soundly backed pension initiatives in June.

Riordan's measure would end a guaranteed pension that city workers have enjoyed for decades; in it's place would be a 401(k)-style plan that workers would contribute to, along with the city. A 401(k)-type plan would stabilize pension costs for the city, Riordan said.