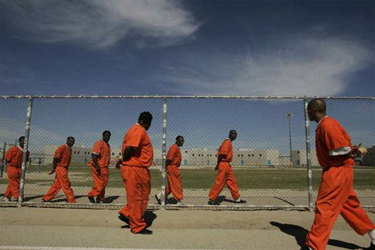 Counties must gain control over the state funds they need to house, supervise, monitor and rehabilitate state prisoners and parolees. Photographed: Inmates walking in the prison yard at the California State Prison-Lancaster on June 10, 2010. (Los Angeles Times)

There are two ways to break a promise: all at once, short and to the point, perhaps with a word of regret, or over the course of months, in a silent, maybe-yes maybe-no passive-aggressive snub. Sacramento, in its cruel brilliance, managed to use both methods simultaneously as it broke, and continues to break, a promise to fund the transfer of state parolees and prisoners to county control.

Too bad it's not just some internal government versus government spat. It's a major breach of faith that could kill long-held hopes for prison reform - and in the process threaten to end the statewide decline in crime.

At issue is public safety "realignment," which is wonkese for the state government's plan to offload its prison overcrowding problem onto the 58 counties. Gov. Jerry Brown in January said the state would transfer money along with the parolees and inmates on the theory that counties could be more efficient and effective than the state prisons, perhaps by spending on rehabilitation instead of just on imprisonment.

Five years of state funding for local public safety and prisoner rehabilitation was to come from extending sales tax and vehicle license fee increases that were set to expire July 1. The increases were to go hand in hand with a constitutional amendment that obligated the state to send counties the necessary money. But Republican lawmakers blocked the package from going to the ballot. Still, beginning Oct. 1, newly arriving state parolees will be supervised by county probation officers, and new non-serious convicts will go to county jails instead of state prisons. The transfer is forever, but the budget provides funding for only nine months.

After that, who knows? Perhaps Sacramento will have pangs of conscience and allocate more money. Perhaps GOP lawmakers will change their minds on the tax measures, or perhaps they will send voters a constitutional amendment that requires the funding transfer but does not include the taxes. And perhaps not. Counties may find they have no way to pay for job training, mental health, substance abuse or other rehabilitation programs for the ex-offenders who will be coming home. Or even for jail.

There must be something about that first flight to Sacramento that makes newly elected state lawmakers - many of them former county and city officials - forget that their constituents do not distinguish between state and county failures. If realignment is to become more than the latest California exercise in passing the buck (while keeping the bucks), state officials must step up with a constitutional commitment to funding. Counties must finally gain control over the state funds they need to house, supervise, monitor and - yes, there is still hope - rehabilitate state prisoners and parolees.