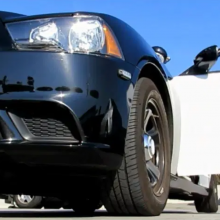 Seven people were sent to area hospitals, including one with critical injuries, from a multi-vehicle crash near the Ventura (101) Freeway in Calabasas Sunday that involved two Los Angeles police officers in a patrol vehicle who were not injured, authorities said.

The two officers were leaving the scene of another call shortly after 10:30 a.m., when they were rear-ended as a part of the chain-reaction crash, said Officer Melissa Podany of the Los Angeles Police Department's Media Relations Section.

Firefighters and paramedics were dispatched at 10:37 a.m. to the crash scene on Las Virgenes Road near the westbound 101 Freeway, according to a Los Angeles County Fire Department dispatcher.

A Sigalert was issued sometime after the crash closing the No. 4 lane of the westbound freeway and the Las Virgenes Road off-ramp, the California Highway Patrol said.