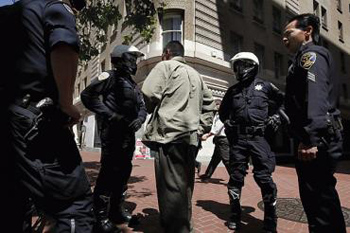 Police officers detain a man for harassing pedestrians on Market Street. In 1994, S.F. voters mandated a staffing level of 1,971 full-duty officers. In 2012, the S.F. Police Department is about 200 below that mark. (Paul Chinn / The Chronicle)

More San Francisco police officers would be walking the beat and fewer firefighters would be forced to work mandatory overtime under Mayor Ed Lee's plan to bolster the city's depleting public safety ranks.

The new hires, if approved by the Board of Supervisors, would represent one of the biggest hiring commitments in years. The plan is part of the mayor's city budget that he will unveil Thursday morning at City Hall.

"This has been a priority for my administration," Lee said. His budget also includes training 30 new emergency medical technicians.

Lee said he doesn't want to stop increasing staffing after two years. He plans to add an additional three police academy classes and one fire academy class annually for each of the four years after that. The cost of a Police Academy class is $5 million to $6 million. A Fire Academy class costs about $800,000.

However, his budget proposal only covers the next two years. The mayor and the Board of Supervisors do not have the authority to lock in funding commitments beyond that at this point.

With the city's violent crime rate near a historic low, there hasn't been an outcry for more police.

"I want to keep it that way," Lee said. He said he doesn't want to get to the point where the diminishing number of officers leads to more crime and puts the city "on the defensive."

The goal for the San Francisco Police Department is to hit the voter-mandated staffing level of 1,971 full-duty officers by the fiscal year that ends in June 2018. The staffing level was set by city voters in 1994 when San Francisco's violent crime rate was the highest in the state.

The force now falls more than 200 officers short of that number, said Police Chief Greg Suhr. With anticipated retirements over the next few years, the shortage may near 400 if the ranks aren't replenished, Suhr said.

He said the current shortfall hasn't slowed the department's response time to calls for assistance.

"It's more what the officers do in between responding to calls ... to take that extra three to five minutes to make it personal."

He said the new officers will provide more bodies to walk and bike their beats and build relationships in the community, something residents and merchants have been requesting.

The San Francisco Fire Department, with 1,371 firefighters now on the job, hopes to build the number above the 1,500 mark.

"We are at an all-time low in terms of our firefighters," said Chief Joanne Hayes-White. "In recent years, because we haven't been able to hire to match the levels of retirement, we've had to place heavy reliance on overtime and that has become an issue for our department."

The department's overtime budget hovers around $25 million a year, and has become a constant source of irritation for the budget hawks and supervisors at City Hall.

Supervisor John Avalos, who has been a vocal critic of padding the budgets for police and fire in the past, said he supports the mayor's proposed funding for new recruits this time around because there are no cuts to health care and social services for the poor.

The mayor's budget, which will push the city's annual spending past the $7 billion mark for the first time, is not expected to receive much pushback because no cuts will be made to health and human services and most city workers will receive a raise. About the only issue stirring controversy is the Municipal Transportation Agency's plan to start charging for parking at meters on Sundays.

Supervisor Carmen Chu, who chairs the board's budget committee, stood by the mayor as he announced the hiring plan at the city's Police Academy in Diamond Heights while recruits practiced handcuffing techniques in the next room.

"This is the first time we're actually talking about investing in public safety over a period of time," she said. "I think it sets the city in a good direction."