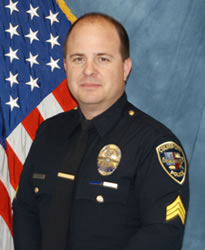 •  Info on the fundraiser for Sgt. Curtis Massey

A Culver City police officer and a Van Nuys man were killed Wednesday in a head-on collision that closed several lanes of the 10 freeway for hours during the morning commute.

Sgt. Curtis Massey, 41, was driving east on his way to work when he was struck about 5 a.m. just west of National Boulevard by a silver Toyota Camry traveling the wrong way, said Officer Miguel Luevano of the California Highway Patrol. Massey's unmarked police car, a four-door Dodge Charger, was engulfed in flames.

No one else was hurt and the CHP is investigating. Pete Demetriou, a radio reporter for KFWB-AM (980) was driving to work around 4:55 a.m. on the eastbound 10, when he saw a car, driven by the Van Nuys man, coming toward him.

"You're used to seeing headlights coming at you, but you assume they're on the other side," he said. "At about 200 yards I realized he was coming in my lane." Demetroiu said he called police after the car passed him traveling about 65 mph. All eastbound lanes and two westbound lanes of the 10 were closed at the 405 freeway until about 1 p.m.

Massey, who is survived by a wife and three young children, was a 17-year veteran of the police department and was most recently assigned to the juvenile detective bureau.

Police Chief Don Pedersen told reporters that Massey dedicated much of his free time to working with at risk-teens and every year volunteered for the Santa sleigh, a holiday event in which officers escort Santa Claus around the city and distribute presents to children."He was a friend and trusted colleague who could always be counted on to be the first one to volunteer for an assignment," Pedersen said of Massey, who was a Medal of Valor recipient. "The community today has lost a dedicated police sergeant."

Megan Gallagher, 28, a former community service officer who worked with the department for five years, was shocked when she heard the news about Massey, a colleague who had served as her mentor.

"He was someone I looked up to and someone I trusted at the station. Being one of the few females there, it's kind of hard to talk to everybody," she said. "When I started there, we have to get our uniforms and he offered up his jacket so I didn't have to spend the money. He made my first days there comfortable. He was an automatic friend from Day One."

On the morning of the accident, I had a ten a.m. audition at Culver Studios at the junction of Washington Blvd. and Culver Blvd. for a chance to play Meryl Streep's psychiatrist in a Nancy Meyers movie. My wife, the actress Alley Mills, had a ten a.m. rehearsal call at her soap opera, "The Bold and the Beautiful," at CBS Television City, Fairfax and Beverly in Hollywood. We live on the west side in Venice.

At 8:45, I turned on 1070 News Radio to hear the traffic report. All lanes closed on the 10, it said, and as a result, eastbound traffic on Venice Blvd. and Washington Blvd. was virtually at a stand-still. Both of us panicked. "Damn it," I muttered, reminding myself of Jack Bauer on "24." "One more inconvenience in Los Angeles."

We both flew out of the house. I shark-drove side streets and managed to get to my audition only ten minutes late. Alley was tardy by three quarters of an hour. So was everyone else in the cast. And as the day went on, we heard stories of actors, directors and crew people in the same fix all over the city. I remember thinking, "It's like a movie, like 'Crash,' or something. One incident happens and dozens of lives are affected."

The next day, I looked in the paper to find out what had occurred that had driven me so nuts. The small piece on the inside of the California section I've re-printed above was what I found. When I read it I remembered that Alley, when she'd heard that the cops were distributing toys for kids, had gone to the toy store run by a Vietnamese couple next to the old Venice Fox Theater and bought three brand new bicycles. She'd loaded them into our Ford van and driven them over to the station on Culver Blvd. It was a nice black cop who thanked her for them, she said, so I guess it wasn't Curtis Massey.

Later that morning I got a call from my daughter Susie Breitbart, Andrew's wife and the mother of their four young kids. "Dad," she asked me, "do you remember years ago a police officer stopped you for speeding and recognized you from TV and said, 'You're Susie Bean's father; I went to Pali High with her. I can't give you a ticket,' and he let you go?"

"Well, that was my friend Curt from Pali. He's the officer who was killed in that terrible accident on the 10 yesterday. He was a really good guy," she said.

Later on that Thursday, Alley got a call from a friend of hers from Bible study. The cop's wife's best friend, it turns out, is in her class. Six degrees...

An extraordinary human being is wiped off the face of the earth in a split second and all over town we experience it as just one more annoyance in L.A.

I just sent off a good sized check. Perhaps you'll do the same