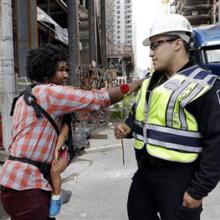 Jasen Frelot, left, holding his daughter Ruby, gives a pat to Seattle police officer Daniel Aguirre after handing the officer a rose in response to the shootings of police officers in Dallas, Friday, July 8, 2016, in Seattle. (AP Image)
Kantele Franko
Police One

The Dallas shooting that killed five officers has spurred an outpouring of support for police, not only in Texas but hundreds of miles away.

Around the country, people have showed up at local departments with flowers, sent social media messages or called to say thanks. They delivered coffee, pizzas, cakes and moments of solace for officers grieving after the deadliest day for U.S. law enforcement since the Sept. 11, 2001, attacks.

One after another, members of the public lined up to hug uniformed officers at a community prayer service Friday in Dallas.

Two patrol cars serving as a memorial outside of police headquarters were adorned with flowers, signs and flags by some of the people pausing to pay their respects to the five officers killed and seven wounded.

John Fife, with his ball cap in hand, passed a red rose to an officer sitting in a vehicle guarding those headquarters. In another corner of the country, a Seattle officer accepted a matching flower from Jasen Frelot, one of several people from the faith community there who set out to show police support.

Officers also received roses in the Cleveland suburb of South Euclid, where they found single stems on their cruiser windshields Friday morning. The Rev. Carmen Cox Harwell, a Beachwood pastor and a former police chaplain, said she put flowers on Beachwood and South Euclid officers' cars as a sign of gratitude.

"I just want them to know that they're loved and they're supported and we need them," she told WOIO-TV.

Abigail Bullard had similar thoughts while home with her 6- and 10-year-old sons in suburban Philadelphia, where the younger boy's fascination with emergency services personnel has developed into a friendship with a few Radnor Township officers. Bullard had observed the kinship within their profession and knew they'd be affected by this week's news, so she and her sons delivered cookies and soft pretzels as comfort.

"It was important to me to say, here we have two young black children that are trying to do the right thing because friends of ours have had a death in the family," she said. When she shared the story on Facebook, she concluded it simply: "Not all young black men are bad, and not all police officers are bad."

A few miles down the road, the Lower Merion Police Department said its officers had heavy hearts but full bellies after another woman and her son delivered a stack of pizzas Friday. They also received coffee and doughnuts, a gesture reported by numerous police departments this weekend.

One of them, the Voorhees Police Department in New Jersey, said such actions "have made us feel better during a very sad time to be a police officer."

Still others simply stopped officers on the street to chat or offer hugs.

"It's just been amazing. Our guys can't go out this morning without getting stopped by people wanting to thank them," Dustin Dwight, a spokesman for Louisiana State Police Troop L, told NOLA.comThe Times-Picayune on Friday.

In Chattanooga, Tennessee, officers were getting extra handshakes from strangers at a local concert Friday night.

"They always comfort and, I guess, wrap their arms around us, to protect us as well as we protect them," Chattanooga Sgt. Tommy Meeks told WRCB-TV.

In Ballwin, Missouri, where a suburban St. Louis policeman was shot and critically hurt during a Friday traffic stop, Andrew Kulha brought the investigators water. He told KMOV-TV he thought it had "been a rough few days to be an officer."

The Dallas shooting occurred during a Thursday night protest over fatal police shootings of black men in Minnesota and Louisiana earlier in the week.