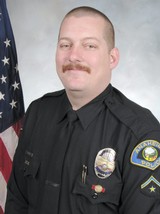 Anaheim Police Officer Brian Hayes was killed Sunday, when the small plane he was flying in crashed on takeoff in Winslow, Ariz.

A Simi Valley police officer and her boyfriend, an Anaheim police officer, were killed Sunday in a small plane crash in Winslow, Ariz.

Nicole Anderson, 32, an eight-year veteran of the Simi Valley Police Department, was a passenger in the single engine plane that was piloted by the Anaheim officer, Brian Hayes, 35, both police departments announced Monday.

The crash occurred shortly after 10 a.m. during takeoff at Winslow-Lindbergh Regional Airport, immediately killing both officers, the departments said. The Mooney M20 aircraft came to a rest upside down at the end of the runway.

The National Transportation Safety Board and the Federal Aviation Administration responded to the crash site, but had not released the cause of the crash as of Monday.

"Everyone is mourning or in disbelief," Lewis said. "I mean, she was just here Friday and now we don't have her." 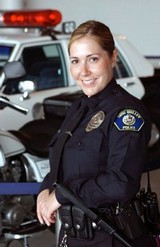 Simi Valley police officer Nicole Anderson, 32, was killed Sunday, when the small plane she was flying in crashed on takeoff in Winslow, Ariz.

Mayor Bob Huber said that in light of Anderson's death, city officials decided it was not the appropriate time to hold the celebration of the department, which was founded in 1971.

"It's a sad day for our town," Huber said. "We've lost one of our finest police officers."

Lewis said Anderson "was really just a well-rounded officer with a bright future. She was fun-loving and also bright. She had people skills and, you know, cops aren't always known to have those."

Lewis added that for "a female officer to be as successful as Nicole was in the tough profession of law enforcement, which is dominated by male officers, was really a testament to the person she was."

Anderson "was extremely well liked by everyone," McGinty said. "She will be remembered for her positive attitude, distinctive laughter and infectious smile. She was very dedicated to her career and her co-workers."

A 2003 graduate of CSU Los Angeles with a bachelor's degree in criminal justice, Anderson joined the Simi Valley Police Department that year and served in a variety of assignments, including patrol officer, bicycle patrol team member, crisis negotiation team member and Explorer adviser. Most recently, she was the department's youth services officer.

She is survived by her parents, who are divorced. Her mother, Michelle, lives in La Crescenta.

Funeral arrangements are pending for both officers.

Hayes joined the Anaheim Police Department in 1999 and served in various assignments, including patrol officer, traffic investigator and detective.

He is survived by his parents, Michael and Pam Hayes, of Orange County.