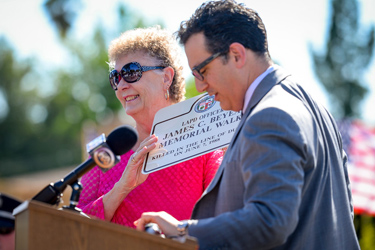 Cathy Beyea is presented with a replica sign by Los Angeles city council member Bob Blumenfield at a ceremony which named a memorial walk after Beyea's son James Beyea who was slain while on duty as an LAPD officer in 1988. An effort had been underway for some time to get the walkway named in honor of the officer. (Photo by David Crane/Los Angeles Daily News )

To view more photos from the dedication, please click here.

Los Angeles city officials on Thursday dedicated a pathway in Reseda to the memory of a rookie police officer killed in the line of duty nearly 27 years ago, completing a mission started by the slain officer's friend.

Among the attendees was LAPD Sgt. Walter Hanna, who had met Beyea years earlier in the California Air National Guard.

Hanna, then a police officer with the Los Angeles Unified School District, still has vivid memories of the day that Beyea lost his life. "That morning, I got up, got in the car, and I was listening to the radio, and I heard his name - that he'd been shot and killed," he said.

"I had to pull over to the side of the road," Hanna told the Daily News last year. Reeling, he drove to the international guard unit at Van Nuys Airport, where former and current members gathered to console each other.

"It hit me pretty hard," Hanna said. "Jim was just the nicest guy in the world. He was a Valley guy, living in Reseda where he grew up."

Since the site was decided upon, neighbors have been caring for and landscaping the pathway since 2009.

Blumenfield presented Officer Beyea's mother, Cathy, with a replica of the sign identifying the walkway and a proclamation from the City Council, as an LAPD helicopter did a flyover and a stiff southerly breeze kept a row of American flags at attention.

Cathy Beyea didn't learn about the effort to honor her son until just recently. "Oh my God, this is fantastic. I can't believe it," she said. "Not a single day goes by that I don't think about him. I've learned to deal with it, but I still think of him like it was yesterday."

Beyea had been on the force for three months when he was sent to a burglary call in North Hollywood in June 1988. There was nothing routine about it.

He confronted two teenage gang members trying to steal merchandise from a Lankershim Boulevard stereo shop. A fight ensued, and one of the suspects, Robert Steele, 16, managed to take Beyea's gun and shoot him.

Four hours later, Steele was shot and killed by officers in the attic of an abandoned home. His family later sued the four officers on the scene for $2 million in U.S. District Court, but a jury determined there was no fault in the incident.

Hanna, also a Reseda resident, said he got the idea to memorialize Beyea in 2004 while in a course for a masters in public administration at Cal State Northridge. One assignment was to take on a project and come up with steps to mobilize the community.

He immediately thought of Beyea and the best ways to honor his sacrifice. That effort resulted in turning what had been a dirt dumping ground into a place where residents can relax and reflect.

While at this point, the memorial on the east side of Crebs remains dirt, Hanna said, "To me, it's just a beginning. With an official monument, I can go get matching funds from the city to get a grant for a nice granite walkway with a concrete ribbon."

Blumenfield hailed the walkway as an "organic effort" out of a seed planted by community members. "It's an inspiring place," he said. "I feel really good about it on many levels."